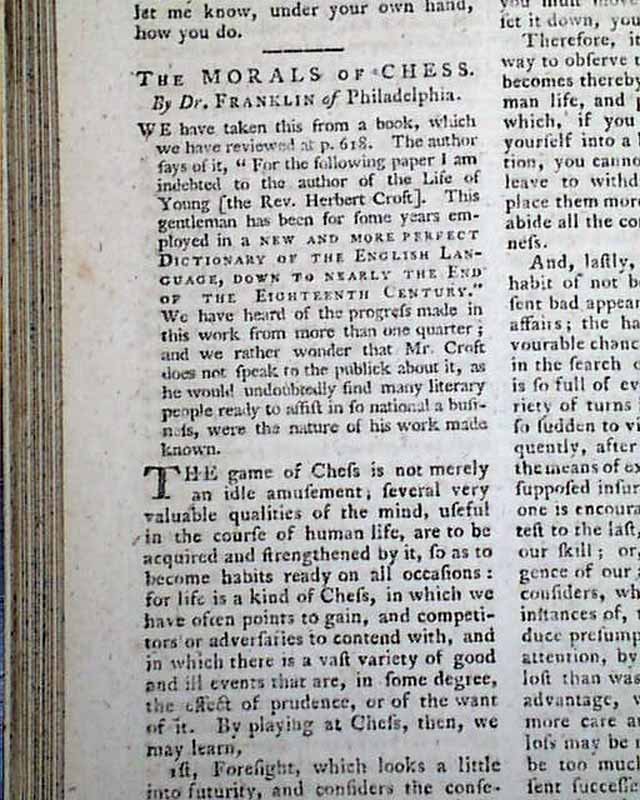 Within is an interesting article titled: "The Morals Of Chess, By Dr. Franklin of Philadelphia" which takes nearly two pages. The article begins: "The game of chess is not merely an idle amusement; several very valuable qualities of the mind, useful in the course of human life are to be acquired & strengthened by it..." with much, much more  An interesting & uncommon item by Ben Franklin & rare to find Franklin articles from during his lifetime.
Relating to this is an article on the game of chess & how it is strategically played, found near the back of this issue. This articles takes close to a full page.
Also of interest in this issue include: "Dr. Hershel's Recent Discovery of Volcanoes in the Moon". Near the back is "American News" which includes mention of Governor Bowdoin issuing a Proclamation for apprehending those involved in the Shays' Rebellion, with Ben Franklin approving of the proclamation.
Also reported is an almost laughable comment on the efforts of the Constitutional Convention: "This country is at present on the verge of being thrown into popular ferment; delegates are sent from every state to Philadelphia to form a convention for the purpose of revising, altering, or perhaps totally annihilating the different constitutions of the country. This will, no doubt, produce a scene of confusion & anarchy. Dr. Franklin and General Washington are members of  this convention."
Included are both full page plates called for.
Complete in 96 pages, full title/contents page with an engraving of St. John's Gate, 5 1/4 by 8 1/4 inches, an inked number at the blank spine of the title page (which is partially close-trimmed with no loss of text), but in overall very nice condition.