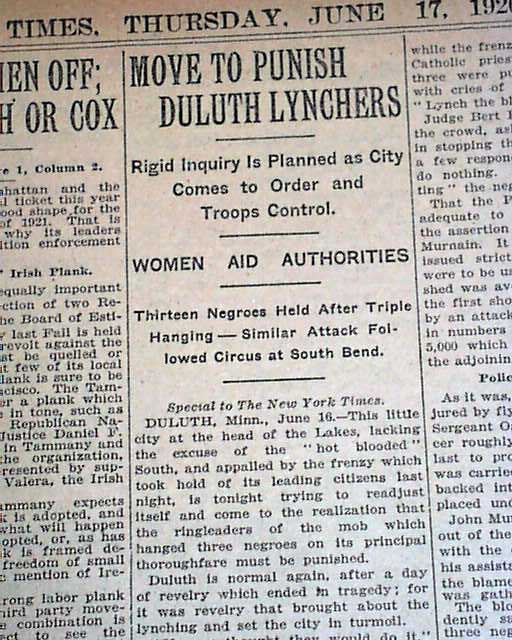 THE NEW YORK TIMES, June 17, 1920
* Duluth, Minnesota lynchings
* 3 Negro circus workers hanged
* Isaac McGhie - Nate Green - Elmer Jackson
The top of page 3 has one column headings: "MOVE TO PUNISH DULUTH LYNCHERS" "Thirteen Negroes Held After Triple Hanging--Similar Attack Followed Circus at South Bend" and more. (see)
Complete with 32 pages, light toning at the margins, irregular along the spine, generally nice.
wikipedia notes: In June of 1920, the James Robinson Circus arrived in Duluth for a performance. Two local teenagers, Irene Tusken, age nineteen, and James Sullivan, eighteen, met at the circus and ended up behind the big top, watching the black workers dismantle the menagerie tent, load wagons and generally get the circus ready to move on. What actual events that transpired between Tusken, Sullivan and the workers are unknown; however, later that night Sullivan claimed that he and Tusken were assaulted, and Tusken was raped by five or six black circus workers. In the early morning of June 15th, Duluth Police Chief John Murphy received a call from James Sullivan’s father saying six black circus workers had held the pair at gunpoint and then raped Irene Tusken. John Murphy then lined up all 150 or so roustabouts, food service workers and props-men on the side of the tracks, and asked Sullivan and Tusken to identify their attackers. The police arrested six black men in connection with the rape. The authenticity of Sullivan's rape claim is subject to skepticism. When Tusken was examined by her physician, Dr. David Graham, on the morning of June 15, he found no physical evidence of rape or assault.
Newspapers printed articles on the alleged rape, while rumors spread throughout the town that Tusken had died as a result of the assault. Through the course of the day, a mob estimated between 5,000 and 10,000 people formed outside the Duluth city jail and broke into the jail to beat and hang the accused. The Duluth Police, ordered not to use their guns, offered little or no resistance to the mob. The mob seized Elias Clayton, Elmer Jackson, and Isaac McGhie and found them guilty of Tusken's rape in a sham trial. The three men were taken to 1st Street and 2nd Avenue East, where they were lynched by the mob.
The next day the Minnesota National Guard arrived at Duluth to secure the area and to guard the surviving prisoners, as well as nine other men who were suspected. They were moved to the St. Louis County Jail under heavy guard.