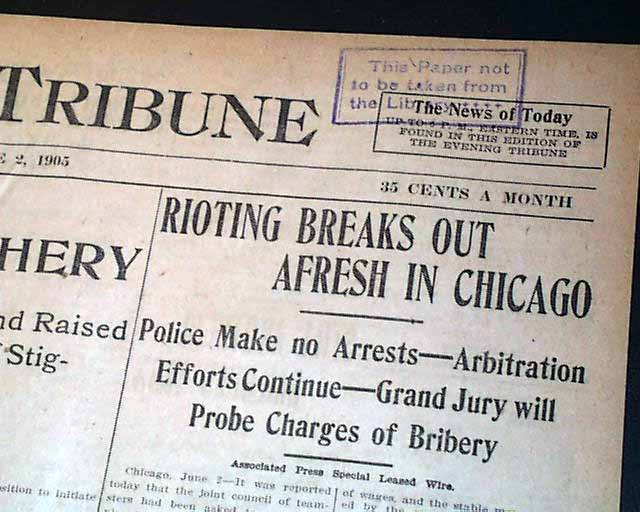 The top of the front has a two column headline: "RIOTING BREAKS OUT AFRESH IN CHICAGO" with subhead. (see) Nice for display. Surprisingly this issue is in good condition being from the "wood pulp" era. Very hard to find issues that are not totally fragile from this era in paper.
Complete with 6 pages, 2 small library stamps within the masthead, a little irregular along the spine, a little creasing, generally nice.

wikipedia notes: The 1905 Chicago Teamsters' strike was a sympathy strike and lockout by the United Brotherhood of Teamsters in the summer of 1905 in the city of Chicago, Illinois. The strike was initiated by a small clothing workers' union. But it soon spread as nearly every union in the city, including the Teamsters, supported the job action with sympathy strikes. Initially, the strike was aimed at the Montgomery Ward department store, but it affected almost every employer in the metropolitan region after the Teamsters walked out. The strike eventually pitted the Teamsters against the Employers' Association of Chicago, a broad coalition of business owners formed a few years earlier to oppose unionization in Chicago.