Home > Back to Search Results > The day war was officially declared...
Click image to enlarge 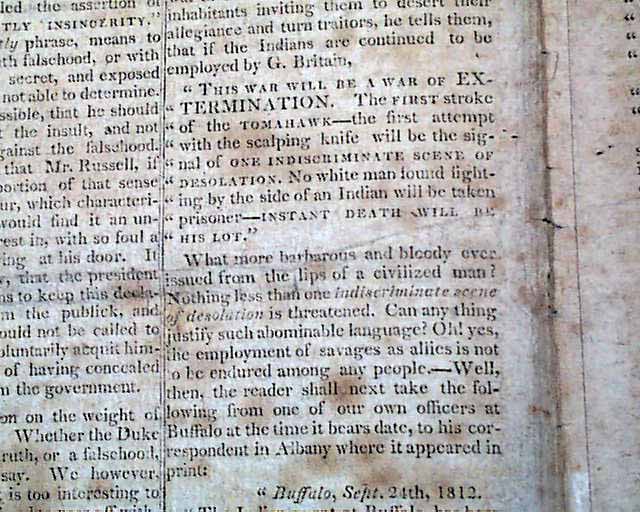 
THE UNITED STATES' GAZETTE FOR THE COUNTRY, Philadelphia, June 19, 1813

On this very day it became official that a state of war existed between the United States and Great Britain, so it is not surprising that this issue has much war-related content.
Page 3 has a lengthy item concerning war which includes a quote from James Madison which mentions: "...a proclamation to the inhabitants inviting them to desert their allegiance & turn traitors, he tells them, that if the Indians are continued to be employed by G. Britain, this was will be a war of EXTERMINATION. The first stroke with the scalping knife will be the signal of one indiscriminate scene of desolation. No white man found fighting by the side of an Indian will be taken prisoner--Instant Death Will Be His Lot...." with more.
This issue has several additional reports concerning early war action (see photos).
Eight pages, never bound nor trimmed, 10 3/4 by 13 1/2 inches, archival strengthening at the spine, nice condition.