Home > Back to Search Results > It's war against England...
Click image to enlarge 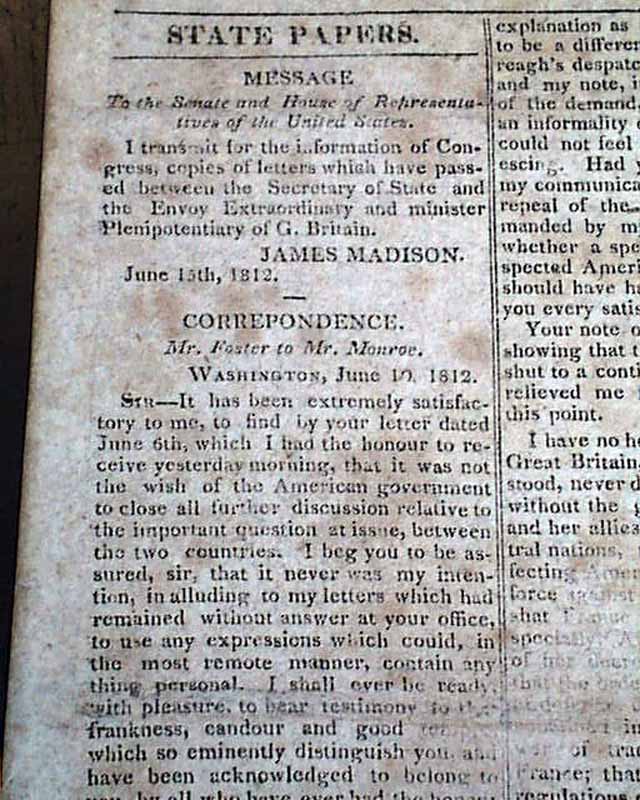 
THE UNITED STATES' GAZETTE FOR THE COUNTRY, Philadelphia, June 29, 1812  This is just the 2nd issue after the declaration of war against England, beginning the War of 1812. So it is not surprising that there are several reports concerning relations with England.
The complete front page is taken up with correspondence concerning relations with England, prefaced with a nice form the President signed; James Madison. Page 3 has a lengthy editorial headed; "The Time For Decision" which begins: "The continued authorities of these United States have passed a law declaring that war east between the united States and Great Britain, and nobody can doubt that this law places the two countries in a state of war..." with much more, taking over half of the page. Another editorial begins: "If any thing were wanting to develop the character of the war in which we have so happily engaged, or to explain the motives of its author, such an illustration would be found in the report of Mr. Gallatin on the non-importation law..." with more, taking over a full column.
More items concerning relations with England.
Eight pages, never bound nor trimmed, 10 3/4 by 13 1/2 inches, archival strengthening at the spine, nice condition.