Home > Back to Search Results > This magazine is not recorded in "History of American Magazines"...
Click image to enlarge 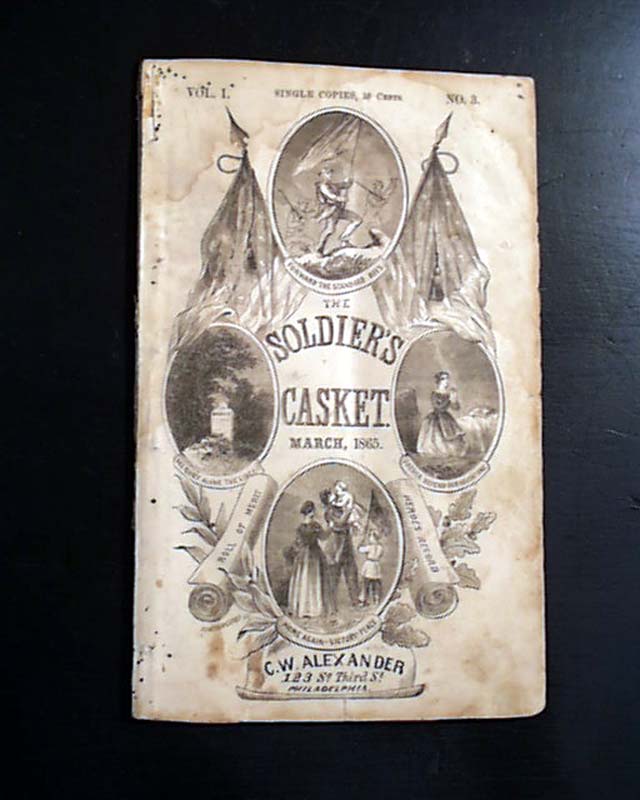 This is the volume 1, number 3 issue of a title which lasted but 12 issues, January thru December, 1865. There is no record of it in Mott's "History of American Magazines" and nor can I find information on the internet. It is recorded in "Union List of Serials" which notes that it is held by 8 American institutions. Two institutions make all issues available online.
Rich West, owner of Periodyssey, writes of this title: "The Soldier’s Casket is one of the great repositories of Civil War stories told by northern soldiers. The primary feature of each issue is first-person accounts of Civil War battles. The most common contribution is a description of some heroic or courageous deed in battle, written by a fellow soldier or the dead veteran’s family. All subjects are identified by their name, rank, and regiment. Many of the articles, for veracity’s sake, quote from personal letters and official reports. A fraction of each issue is devoted to war fiction and poetry."
This issue still has the front and back wrappers as well as the full page plate captioned: "The Soldier's Legacy To His Country". Some of the articles include: "A Young Hero" "Presentation of Flags to the War Department" "Not Done Fighting"  "Riding A Rebel" "The Heroes of Hatcher's Run" "An Antietam Hero" "Gallant Conduct of the Third Iowa Volunteers at the Battle of Shiloh" "A Guerrilla Fight in Missouri" and so much more.
Decorative front wrapper is quite ornate & displayable, complete in 64 pages, measures 5 3/4 by 9 1/4 inches. Some wear at the spine and margins, generally good condition.