Home > Back to Search Results > Great issue on creation of the Tomb of the Unknown Soldier...
Click image to enlarge 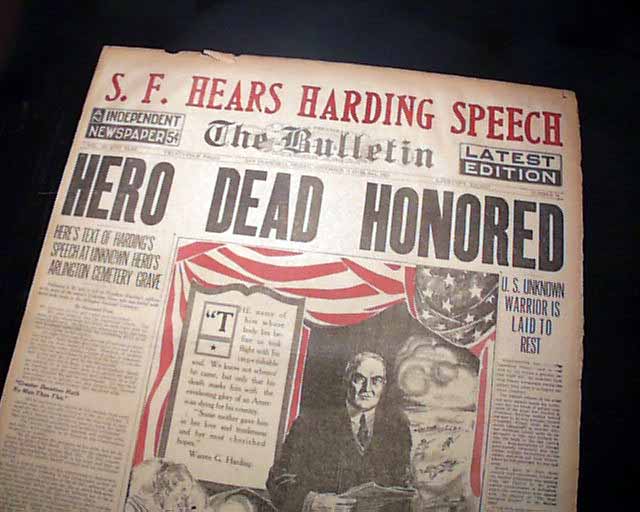 Great issue on creation of the Tomb of the Unknown Soldier...

Although we have offered several newspapers on the beginning of the Tomb of the Unknown Soldier at Arlington Cemetery, none have been as graphic and displayable as this issue.
The large and bold banner headline announces: "HERO DEAD HONORED" with subheads including: 'U.S. Unknown Warrior Is Laid To Rest" "Here's Text of Harding's Speech At Unknown Hero's Arlington Cemetery Grave". More coverage on page 2 as well.
On March 4, 1921 Congress approved the burial of an unidentified American serviceman from World War I in the plaza of the new Memorial Amphitheater. On November 11, 1921--the date of this issue--the unknown soldier brought back from France was interred below a three-level marble tomb. Thus was the beginning of one of the most visited sites at the National Cemetery at Arlington.
Contains 22 of 24 pages, lacking the back leaf. Some minor margin chipping, otherwise in uncommonly nice condition for a newspaper of this era.