Home > Back to Search Results > Much on the desperate situation in Texas...
Click image to enlarge 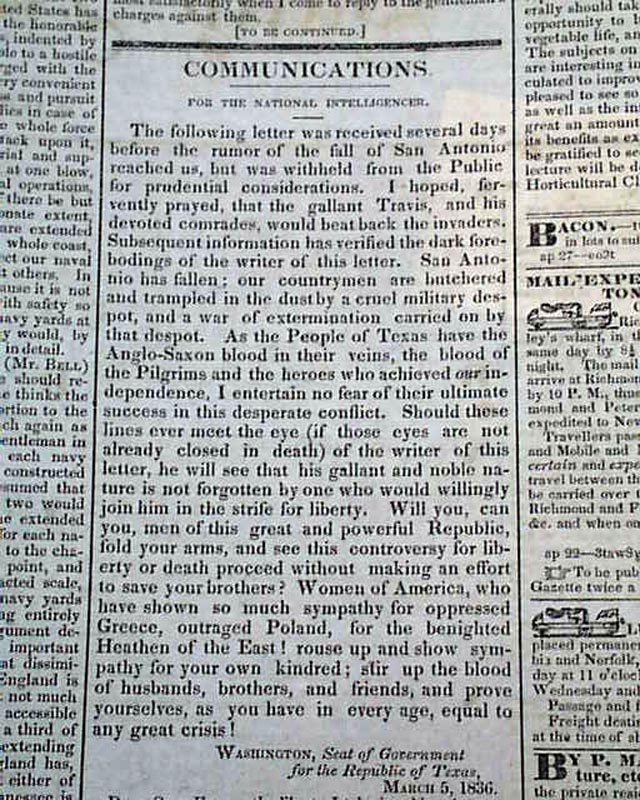 Much on the desperate situation in Texas...

Page 2 has a wonderful letter from the "Seat of Government for the Republic of Texas" dated March 5, 1836, the day before the final assault upon the Alamo. The siege began February 23.
The letter is prefaced with a fine editorial piece calling for people to rally behind the Texan cause. And the letter includes in part: "...You have heard...that 300 Americans, with their rifles...stormed the town of Bexar, or San Antonio, and forced the Mexican garrison of Alamo, 1100 strong, to capitulate. It was a most desperate & noble deed...By declaring ourselves independent we...give Santa Anna a chance of consolidating his power in the Republic...On the 2nd of March we received intelligence from the commandant of Bexar, who had 200 men under his command at the Fort Alamo, that he was attacked by about 1,000 men of the army of Santa Anna & had sustained a bombardment of 24 hours...the next intelligence we fear will be that the gallant & devoted hand of defenders are massacred...if assistance of every description don't come to us soon we are lost. I repeat it again, are lost without resource. We will try to resist, however, and if we fail we will, without terror, meet an honorable death..." with more.
Page 3 has a nice editorial on the desperate situation in Texas, noting in part: "...We grieve for the loss of life in this struggle...We mourn over the fate of Col. Crockett and of all those of his degree of meat who have become victims to their own daring, in defending, at a distance from their own firesides, what they considered the cause of freedom..." with much more.
Four pages, rejoined at the spine, very nice condition.