Home > Back to Search Results > Dramatic issue on the San Francisco earthquake...
Click image to enlarge 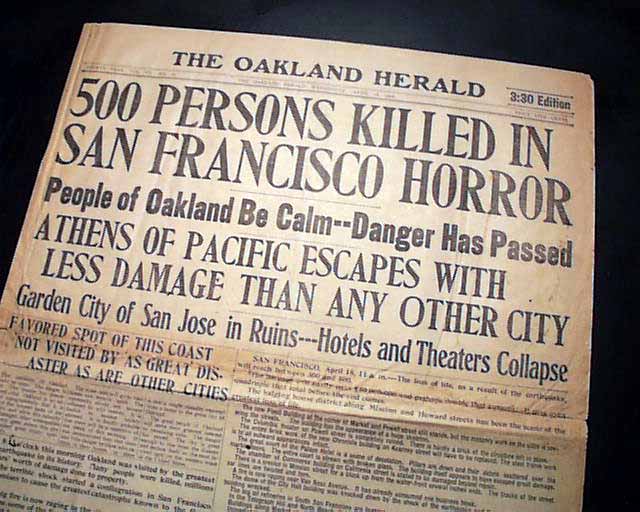 A quite rare newspaper, as not only is this not the more famous (and more common) San Francisco CALL-CHRONICLE-EXAMINER newspaper of April 19 but it is a day earlier yet equally as dramatic. Remember that Oakland is just across the bay from San Francisco.
The bold, banner headline announces: "500 PERSONS KILLED IN SAN FRANCISCO HORROR" "People of Oakland Be Calm---Danger Has Passed" "ATHENS OF PACIFIC ESCAPES WITH LESS DAMAGE THAN ANY OTHER CITY" "Garden City of San Jose in Ruins---Hotels and Theaters Collapse".
There is a wealth of subheads throughout the eight pages as the latest news arrives at the printing office.
Complete in 8 pages, never bound nor trimmed, some wear at the central fold with some perforation, a few archival mends inside, generally in good condition for a newspaper of this era.