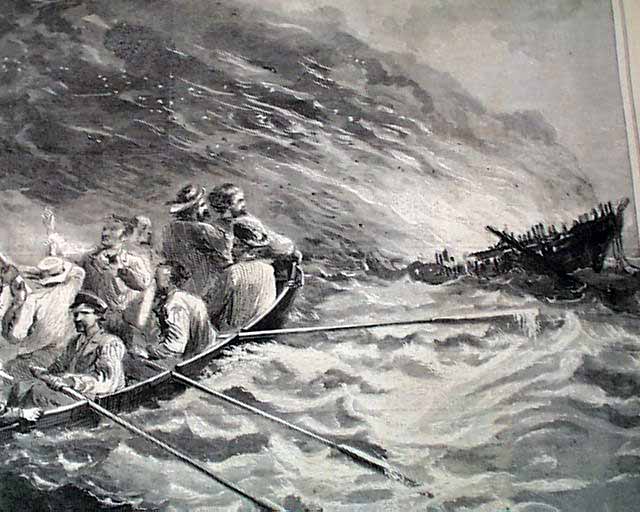 The most notable content would be the full page print: "Burning of the California Clipper 'Hornet', One Thousand Miles from Land" not so much for the print but for the accompanying article titled: "Burning of the Clipper 'Hornet' ".
Another source notes that Mark Twain was in Hawaii at the time the boat of survivors arrived and he reported on the event, interviewing several survivors, a story that this issue of Harper's Weekly published with the illustration giving Twain his first national headline. There is no mention of Twain in the printed article or the caption of the illustration.
As for other prints, the front page shows: 'Scene after the Disaster on the N.Y. Central R.R.' Halfpg: 'The Accident at Johnstown, Pa.' where a bridge collapsed with 400 people on it. Nice Thomas Nast political cartoon: 'The Tearful Convention'. Halfpg: 'Dumping Ground at the Foot of Beach St., New York City'. Small print of: 'The Oldest Fire-Engine in the United States' with text.
Note: the full Mark Twain article on the sinking of the 'Hornet' was published by Harper's New Monthly Magazine, December, 1866.
Complete in sixteen pages, nice condition.