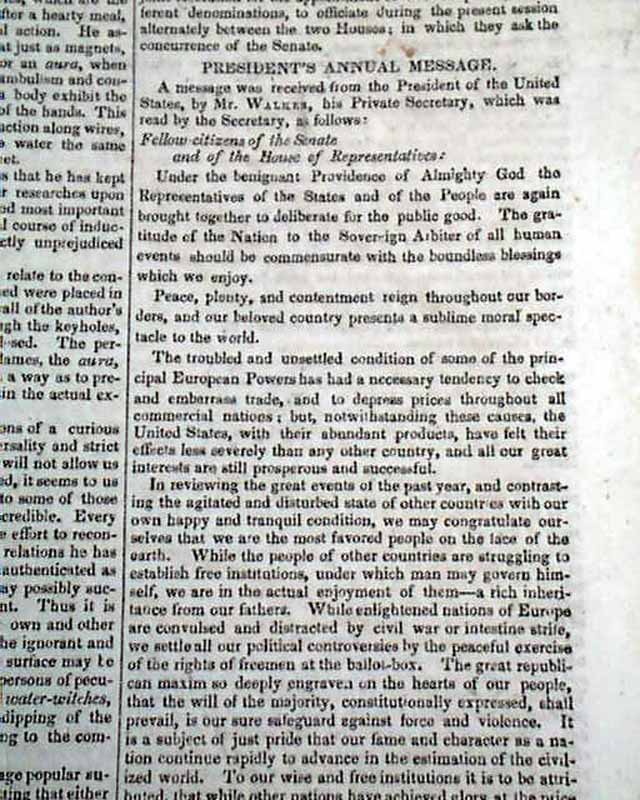 
NATIONAL INTELLIGENCER, Washington, D.C., Dec. 7, 1848  Beginning on the front page and taking all of pg. 2 and most of pg. 3 is  the: "President's Annual Message" to the nation, in which is a rather lengthy & detailed report on the discovery of gold in California.
Although there were earlier newspaper reports of gold discovery, this was the first "official" announcement by the government and did much to cause many to head west and be among the "49ers" who would create the great gold rush in the subsequent months & years.
At one point on pg. 2 in the address is: "...The accounts of the abundance of gold in that territory [California] are of such an extraordinary character as would scarcely command belief were they not corroborated by the authentic reports of officers in the public service who have visited the mineral district & derived the facts which they detail from person observation..." with so much more (see for portions). Great to have this report in this famous newspaper from the nation's capital.
Page 3 has a report headed: "A Rival Gold Region" concerning gold discovery in Texas.
Four pages, archivally strengthened at the blank spine, nice condition.