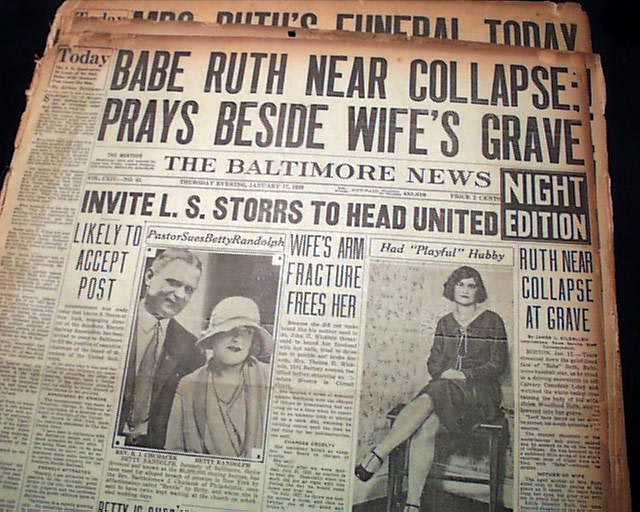 
(4) THE BALTIMORE NEWS, Maryland, a set of four issues dated January 14, 15, and 2 different editions of 17, 1929.
The front page heads on each: 14th: "DENTIST Gives Up In Death of MRS. RUTH" as Babe's wife burned to death in a fire at his house; 15th: "2D AUTOPSY ON MRS. RUTH" with a photo of her & their daughter, Dorothy: 17th: "MRS. RUTH'S FUNERAL TODAY" "Mrs. Ruth's Funeral To Be Held Today, Probe Continues" with a large photo headed: "Widow in Ruth Tangle", the suspected mistress of the Babe; 17th Night Edition: "BABE RUTH NEAR COLLAPSE: PRAYS BESIDE WIFE'S GRAVE" and subhead: "Ruth Near Collapse At Grave".
Each of the four issues is complete, but various flaking at the margins with some margin tears and partially loose at the spine. VERY fragile.