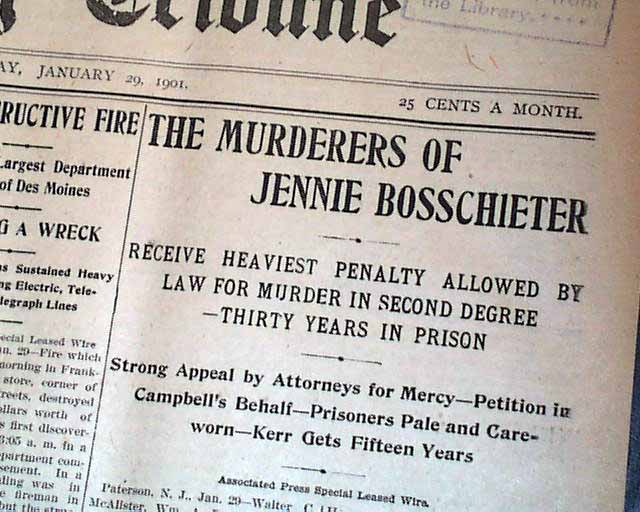 The top of the front page has a two column headline: "THE MURDERERS OF JENNIE BOSSCHIETER" with subheads. (see) Surprisingly this issue is in good condition being from the "wood pulp" era. Very hard to find issues that are not totally fragile from this era in paper.
Complete with 8 pages, small library stamps within the masthead, a few small binding holes along the spine, generally very nice.

wikipedia notes: Jennie Bosschieter (1883–1900) was a woman who was raped and murdered in Paterson, New Jersey, on October 19, 1900. She was an early victim of the date rape drug chloral hydrate which caused her death. Her death received national news coverage and was described as "one of the most revolting [crimes] ever committed in New Jersey."
Jennie left home on October 18, 1900, at 8:10 pm to go on an errand to the drug store, where she met Walter C. McAlister and William A. Death (pronounced "Deeth"). She had previously dated Death but he married another woman. McAlister, Death and two others drank with her in a private party room in Saal's saloon at the corner of River Street and Bridge Street. Her first drink may have been a Manhattan, then she drank an absinthe frappe, and then she had two glasses of Great Western sparkling wine. She was given two or three doses of chloral hydrate in her sparkling wine by McAlister. They took her in a carriage to a secluded area, raped her, and she died from an overdose of the drug. They dumped the body on the ground and her head hit a rock.