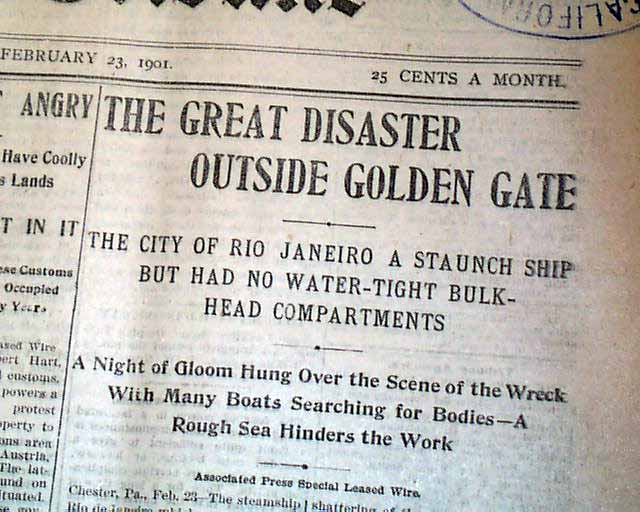 The top of the front page has a two column headline: "THE GREAT DISASTER OUTSIDE GOLDEN GATE" with subheads. (see) Surprisingly this issue is in good condition being from the "wood pulp" era. Very hard to find issues that are not totally fragile from this era in paper.
Complete with 8 pages, small library stamps within the masthead, a few small binding holes along the spine, generally very nice.

wikipedia notes: The SS City of Rio de Janeiro was an iron-hulled steam-powered passenger ship, launched in 1878, which sailed between San Francisco and various Asian Pacific ports. On 22 February 1901, the vessel sank after striking a submerged reef at the entry to San Francisco Bay while inward bound from Hong Kong. Of the approximately 220 passengers and crew on board, fewer than 85 people survived the sinking, while 135 others were killed in the catastrophe. The wreck lies in 287 feet (87 m) of water just off the Golden Gate and is listed in the National Register of Historic Places as nationally significant.