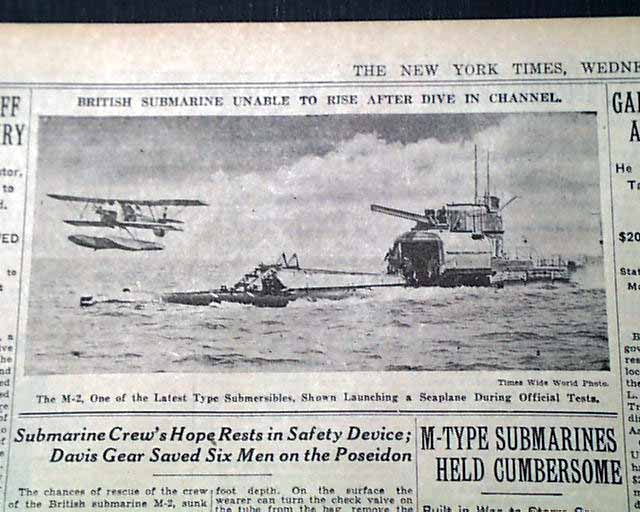 The front page has a two column, 2 line headline: "British Submarine Fails to Rise; Fifty-four Men on M-2 in Channel", with subhead: "Submersible Plane Carrier Is Believed Located on Sea Bottom of Midnight in Fog - Ships and Divers Hasten to Rescue, but Admiralty Fears a Catastrophe". The coverage continues on page 3 and includes a related photo.

Complete in 44 pages and in overall nice condition. See images for details.

wikipedia notes: M2 left her base at Portland on 26 January 1932, for an exercise in West Bay, Dorset carrying Parnall Peto serial N255. Her last communication was a radio message at 10:11 to her Submarine depot ship, HMS TitaniaTemplate:WP Ships HMS instances to announce that she would dive at 10:30 am. The captain of a passing merchant ship, the Newcastle coaster Tynsider, mentioned that he had seen a large submarine dive stern first at around 11:15. Unaware of the significance of this, he only reported it in passing once he reached port.

Her crew of 60 were all killed in the accident. The submarine was found on 3 February, eight days after her loss. Ernest Cox, the salvage expert who had raised the German battleships at Scapa Flow, was hired to salvage the M2. In an operation lasting nearly a year and 1,500 dives, on 8 December 1932, she was lifted to within six metres of the surface before a gale sprang up, sending her down to her final resting place.

The hangar door was found open and the aircraft still in it. The accident was believed to be due to water entering the submarine through the hangar door, which had been opened to launch the aircraft shortly after surfacing. This is a similar reason to the loss of the RO-RO cross channel ferry Herald of Free Enterprise in 1987, which capsized when the sea entered the ship through the large car-deck door which was close to the waterline.

Two explanations have been advanced. The first is that since the crew were always trying to beat their record time for launching the aircraft, they had simply opened the hangar door on surfacing while the deck was still awash. The other theory is that the flooding of the hangar was due to failure of the stern hydroplanes. High pressure air tanks were used to bring the boat to the surface in an awash condition, but to conserve compressed air compressors were then started to completely clear the ballast tanks of water by blowing air into them. This could take as long as 15 minutes to complete. The normal procedure for launching the aircraft was therefore to hold the boat on the surface using the hydroplanes whilst the hangar door was opened and the aircraft launched. Failure of the rear hydroplanes would have sent the stern down as observed by the merchant officers and water would have eventually entered the hangar.