Home > Back to Search Results > Much on John Brown & his wife... The Mormons in Utah...
Click image to enlarge 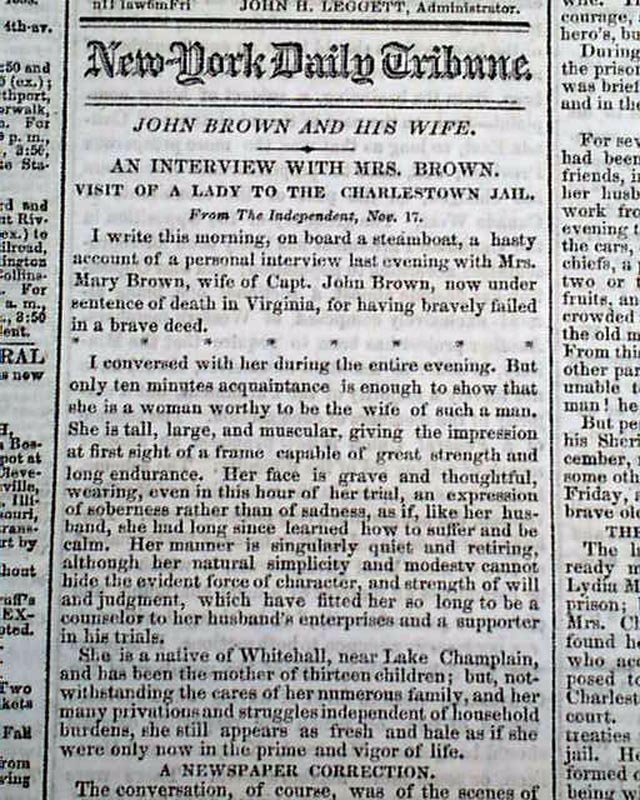 This issue has a wealth of content concerning the John Brown slave insurrection at Harper's Ferry, with other items as well.
Articles include: "John Brown & His Wife" "An Interview With Mrs. Brown--Visit of a Lady to the Charlestown Jail". This article is fascinating initing and takes over two columns, with subheads including; "A Newspaper Correction--Capt. Brown's Religious Character--A Box for Captain Brown--Is He Insane?--His Recent Letters to Mr. Brown"
Also: "Treatment of the Counsel of John Brown art Charlestown" "JOHN BROWN'S INVASION" "Another Fright at Charlestown--The Virginians In Distress--A Painful Rumor--Old John Brown To be Rescued--Soldiers & Cannon Sent For".
There is also a brief item: "Trial of Slavers" being re. the slave ship Wanderer; "The Fugitive Slave Case" at Barnstable, Mass., is concerning the noted case of fugitive slave Columbus Jones, though his name is not mentioned here; and a lengthy Mormon article: "From Utah" being a report datelined: "Great Salt Lake City, Oct. 20, 1859".
As for the latter, a few bits include: "Since the entrance of the U.S. Army into the Valley of the Great Salt Lake the leading spirits of the Mormons have sedulously kept out of the public view...that the lion is not dead nor asleep, but quiet & watchful...If I am not mistaken, Mormonism, like Joseph in Egypt, will ere long arise before the astonished world & demonstrate, 'I am not dead, as ye supposed, but I live!..." with so much more.
Eight pages, a few discrete archival mends, generally nice condition.