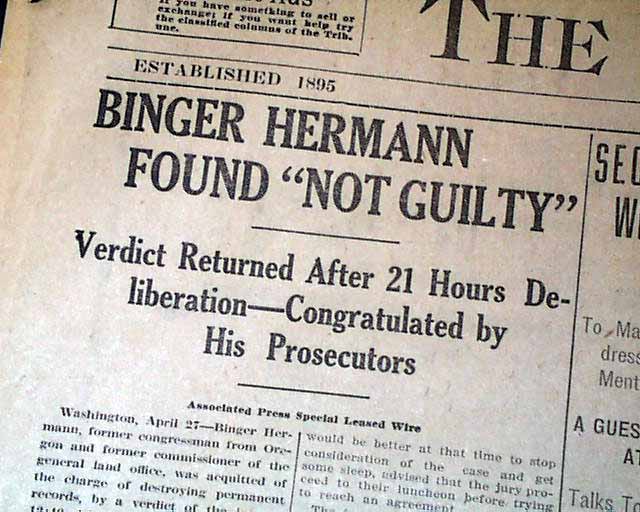 The top of the front page has a two column headline: "BINGER HERMANN FOUND 'NOT GUILTY'" with subhead. (see) Surprisingly this issue is in good condition being from the "wood pulp" era. Very hard to find issues that are not totally fragile from this era in paper.
Complete with 10 pages, a few small binding holes along the spine, generally nice.

wikipedia notes: During his second stint in Congress, Hermann was accused by Hitchcock of fraud against the government, claiming that information on land fraud in Oregon had been sent to Hermann and had been ignored, and that Hermann might have removed or disposed of several files and letters from the General Land Office concerning certain fraud investigations. This scandal, which included nearly all of Oregon's congressional delegation, came to be known as the Oregon land fraud scandal.
Hermann was found not guilty of destroying public documents in 1907, but remained under indictment for collusion of a land deal in the Blue Mountain Forest Reserve in Oregon.