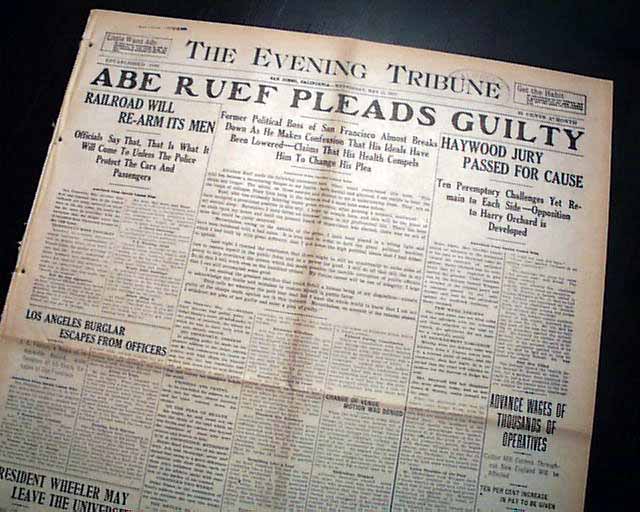 The front page has a nice banner headline: "ABE RUEF PLEADS GUILTY" with subhead. (see) Nice for display. Surprisingly this issue is in good condition being from the "wood pulp" era. Very hard to find issues that are not totally fragile from this era in paper.
Complete with 6 pages, small library stamp within the masthead, generally nice.

wikipedia notes: On December 6, 1906, Ruef and Schmitz were arraigned in court. "As the indictments were read out by the clerk, Ruef made clear his disdain for the proceedings by standing with his back to the judge." At the time of his trial, Ruef occupied offices in The Columbus Tower, in North Beach. In February 1907, Ruef pleaded not guilty. On March 18, 1907, all of the supervisors confessed before a grand jury to "receiving money from Ruef in connection with the Home Telephone, overhead trolley, prize fight monopoly, and gas rates deals." In exchange, "they were promised complete immunity and would not be forced to resign their offices. The grand jury then returned 65 indictments against Ruef for bribery of the supervisors."
After the supervisors' admissions, Ruef reached an agreement with the prosecution that he'd confess and receive immunity from most of the charges. On May 15, 1907, Ruef pleaded guilty and the next day testified before a grand jury, incriminating Schmitz. This led to Schmitz' conviction and removal from the mayor's office on June 13, 1907. Ruef's trial ended on December 10, 1908, with a verdict of guilty and the maximum sentence for bribery: 14 years in San Quentin.