Home > Back to Search Results > Map of Hudson River region... Franklin on exchange of prisoners...
Click image to enlarge 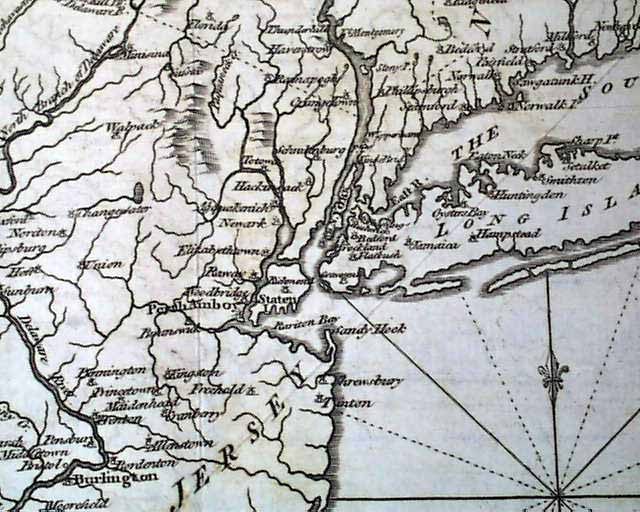 Map of Hudson River region... Franklin on exchange of prisoners...

Of great significance is the very nice foldout map headed: "Map of Hudson's River with the Adjacent Country", which shows from Crown Point & Ticonderoga, south to Philadelphia, & also from Long Island to Lake Ontario with considerable detail.
This map measures 9 by 13 inches in very nice condition. Trimmed at the bottom right margin to allow the map to fold into the issue, not compromising the border.
The first article is: "Debate in the House of Commons" which takes 7 pages and does include discussion on the Revolutionary War, a few of the items including: "...stated the causes that led to the American war...that neither France or Spain would take up arms in favour of the Rebels...the conduct of Ld. Howe, who, in his dangerous passage up the Elk river...conducted a large fleet up Chesapeake bay...General Burgoyne's letters attest that the provincials...were the first that fired upon his troops...one happy opportunity of putting a stop to the effusion of blood when after the battles of Lexington, Concord, and Bunker's Hill, the Congress..." with much more.
Another page has a letter signed in type by: Benj. Franklin, Silas Deane, and Arthur Lee, to Lord North in England, concerning frustrations with attempting an exchange of prisoners, and on the cruelty shown to American prisoners, including: "...The barbarous treatment of Mr. Lovel, in Boston, has no parallel. Of the prisoners made in Fort Washington two-thirds of them perished by the unexampled cruelty & rigours of the captivity...Numbers are now groaning in bondage in Africa & India...Col. Ethan Allen was dragged in chains from Canada to England..." with more. This is followed by: "A Proclamation, for a General Fast" noting: "...most serious consideration the just & necessary measures of force which we are obliged to use against our Rebellious subjects in our colonies & provinces in North America...".
Further on are: "Remarks on Mr. Forester's Account of Capt. Cook's Last Voyage round the World in the Years 1772, 1773, 1774 & 1775..." .
Near the back is a fullpg. letter from General Howe to Lord G. Germaine datelined at Phila., Dec. 13, 1777, in which he details his raiding party into White Marsh, Edge Hill, and Chestnut Hill, before retiring to Philadelphia. He mentions the: "...enemy's intention seems to be to take their winter quarters at Carlisle, York and Lancaster..." when in fact this was the winter of Washington's encampment at Valley Forge. The detailed letter is signed in type: W. Howe. This is followed by a letter from Gen. Phillips datelined Albany, Oct. 12, 1777, with reports on his activities.
Complete in 48 pages, full title/contents page with an engraving of St. John's Gate, 5 by 8 1/4 inches, great condition.