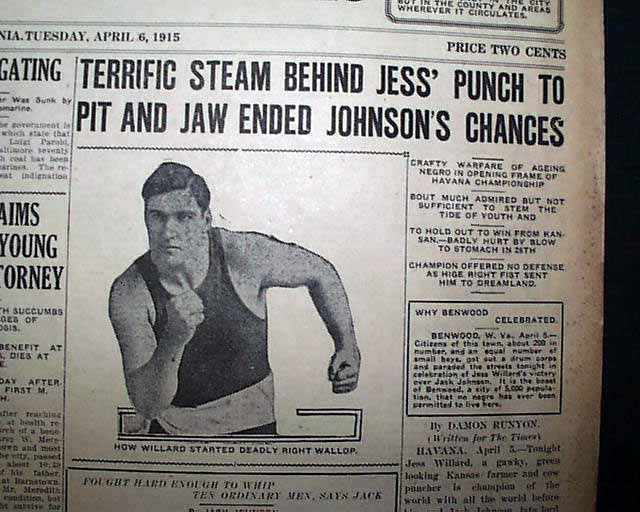 
THE FAIRMONT TIMES, Fairmont, West Virginia, April 6, 1915  The front page of the issue has a three column, two line headline "Terrific Steam Behind Jess' Punch to pit and jaw Ended Johnson's Chances" with subheads "Crafty Warfare and Ageing Negro in Opening Frame of Havana Championship" "Bout Much Admired But Not Sufficient to Stem the Tide of Youth and " "To Hold Out to Win From Kansan -- Badly Hurt by Blow to Stomach in 26th" "Champion Offered No Defense as Hige Right Sent him to Dreamland". This was the world championship bout which lasted 26 rounds and was in the making since 1910. This also includes a photo of Willard with a caption "How Willard Started Deadly Right Wallop". Round by round reporting is also included.
Also on the front page is "Suffrage Convention Plans Complete" "Workers from All Parts of State Will be Here for Event" "Organization for an Active Campign [Campaign] to be Discussed" "Banquet to be Served at the Manley Hotel on Thursday Night".
Other news and advertisements of the day are within.
This is complete in eight pages, does have some small edges tears, the lower right margin has chipped away, otherwise is in good condition. This should be handled with care.