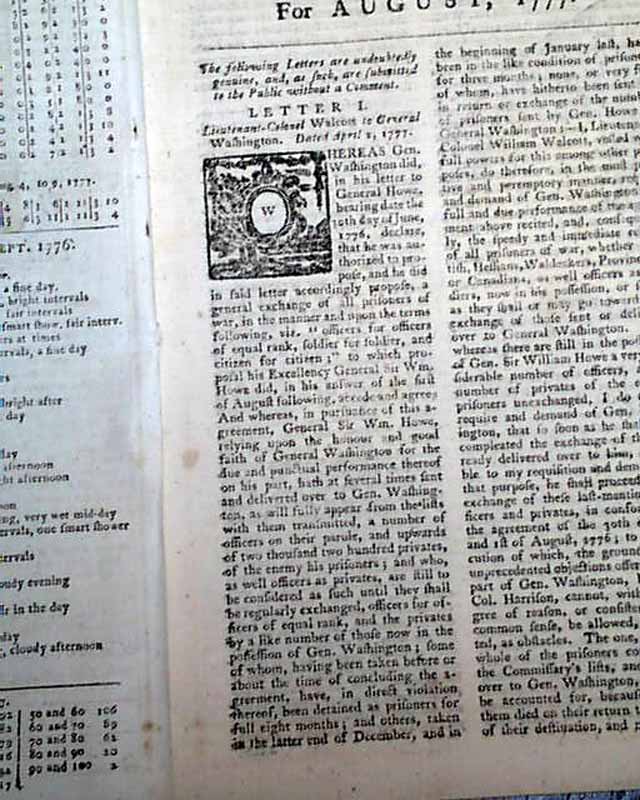 The first five pages are taken up with a series of letters among General Washington, Col. Walcott, and General Howe concerning the exchange of prisoners. One letter is signed: G. Washington, and 3 are signed by: W. Howe.
This fascinating text is followed by a: "Proclamation, by John Burgoyne" dated June 29, 1777, taking a full page and includes: "...The cause in which the British arms are thus exerted applies to the most affecting interests of the human heart; and the military servants of the crown..." with much more.
Near the back is more American news including a report beginning: "Gen. Howe writes...that having established a corps sufficient for the defence of Amboy, the army assembled at Brunswick...upon quitting the camp at Brunswick the enemy brought a few troops forward..." with more. There is also a letter from General Burgoyne, being his account of the taking of Fort Ticonderoga, with considerable detail as the report takes 3 1/2 pages and is signed in type: J. Burgoyne. Very significant.
Included is the foldout bird plate: "The Hoopoe from an Original Drawing" which measures 7 by 11 inches, and in very nice condition.
Complete in 52 pages, 5 1/4 by 8 1/4 inches, full title/contents page, very nice condition.