Home > Back to Search Results > Washington crosses the Delaware... Much more...
Click image to enlarge 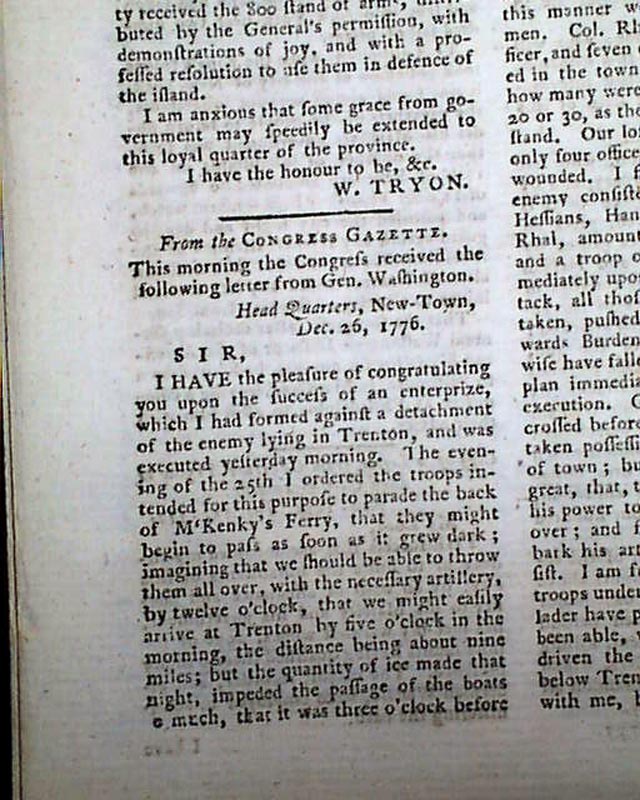 Washington crosses the Delaware... Much more...

This issue has much good content on the Revolutionary War, with talk of troop movements in New Jersey and the vicinity.
The prime content is an excellent letter written & signed by G. Washington dated "Headquarters, New Town, Dec. 26, 1776" which describes his crossing of the Delaware River, reading in part: "I have the pleasure of congratulating you upon the success of an enterprize, which I had formed against a detachment of the enemy lying in Trenton, and was executed yesterday morning. The evening of the 25th I ordered the troops intended for this purpose to parade to the back of McKenky's Ferry that they might begin to pass as soon as it grew dark...but the quantity of ice made that night, impeded the passage of the boats so much, that it was three o'clock before the artillery could be got over...formed my detachment into two divisions...to push directly into the town, that they might charge the enemy before they had time to form..." with further particulars of the ensuing battle.
Washington also reflects on the trying situation by saying: "...the difficulty of passing the river on a very severe night and their march through a violent storm of snow and hail did not in the least abate their ardour...". Very historic reading, and one of the very few accounts of this event which gives some detail of the now-famous event of Washington crossing the Delaware, and from Washington himself.
Yet another page is almost entire taken up with a letter from General Wm. Howe to Lord Germaine dated New York, Feb. 12, 1777 including some reference to the battle at Trenton, and more, with: "...That the Hessian soldiers that had fought their way through the rebels at Trenton & come to New York had requested Gen. Howe to send them back into the Jerseys...That General Howe proposed  passing over from New  York into the Jerseys on the 18th of February...That although when the King's troops took possession of the city of New  York, it was found almost without inhabitants...That the Congress, after declaring General Washington Dictator of the American States for six month, had withdrawn to Baltimore, in Maryland, leaving a committee at Philadelphia to assist him with their advice." with more.
Includes the foldout plate called for being: "A Plan of the Navigable Canal from Chesterfield..." which measures 8 by 12 1/2 inches.
Complete in 52 pages, 5 by 8 1/4 inches, full title/contents page with an engraving of St. John's  Gate, great condition.