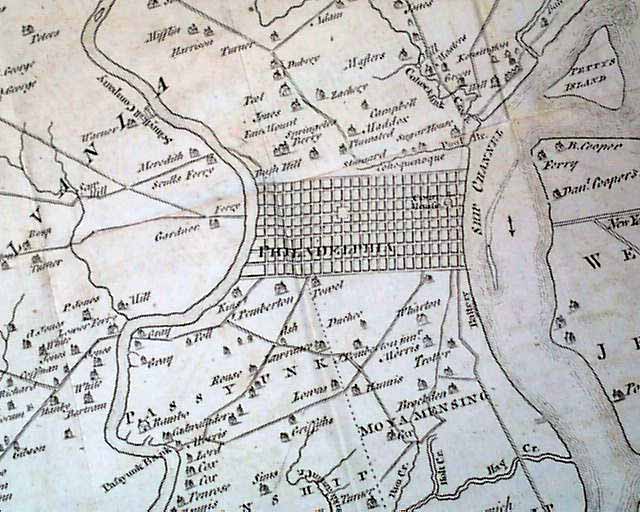 Certainly the prime feature of this issue is the very nice foldout map titled: "A Map of Philadelphia and Parts Adjacent, by N. Scull & G. Heap" which shows the street grid of Philadelphia plus the various towns, roads, streams & rivers in the greater Phila. vicinity.
The map measures 12 by 14 1/2 inches and is in uncommonly great condition. More typically these maps are heavily worn & torn from constant folding & unfolding. The bottom half of the right margin is trimmed close so as to fold into the issue, however no inked areas are compromised. The map is called for on the title/index page of the magazine, verifying its date.
The very first article has over a full page headed: "Debate on Lord Howe's Declaration to the Americans, concluded" which has some interesting reports (see for the beginning).
Another interesting item is headed: "Dr. Price on the Independence of the Colonies" which takes over half a page and begins: "They have, it is said, always had independency in view; and it is this, chiefly, that has produced their present resistance..." with more.
The most historic text in this issue is the very fine & historic report on the Battle of Trenton following Washington's crossing of the Delaware (no mention of this) in a letter from Gen. Howe to Germaine. This article begins: "On the 25th instant, in the evening, a party of the enemy attacked an outguard from the post of Trenton where Colonel Rall commanded with 3 battalions of Hessians..." and concludes: "...The Rebels recrossed the River Delaware immediately with the prisoners & cannon that they had taken." (see for the full text). This report is followed by an: "Extract of a Letter from General Sir Wm. Howe to Lord Geo. Germain, dated New York, Jan. 5, 1777" which reports on the consequences of the battle at Trenton.
There is also an: "Extract of a Letter from Governor Tryon to Lord George Germain, dated New York, Dec. 24, 1776" as well as an "Extract of a Letter from General Sir Wm. Howe to Lord Geo. Germain, dated New York, Dec. 20, 1776". A great wealth of Revolutionary War reporting.
Complete in 48 pages, full title/contents page with an engraving of St. John's Gate, 5 by 8 1/4 inches, great condition.