Home > Back to Search Results > The Battle of Long Island, with a map... Patrick Henry...
Click image to enlarge 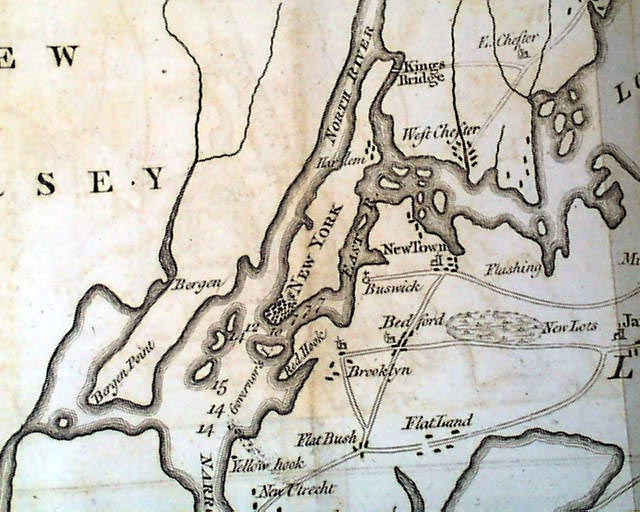 This issue is filled with a great wealth of notable content concerning the Revolutionary War, however the prime piece here is the nice foldout map titled: "Sketch of the Country Illustrating the late Engagement in Long Island".
The map measures 9 by 13 inches & shows the region from Amboy in New Jersey to "Hamsted Plains" and a bit beyond, and north to West Chester & New Rochelle. Points of interest on the map include New Utrecht, Brooklyn, Jamaica, "Flat Bush", New York, Harlem & Flushing. Also shown on the map are Bergen Point, Staten Island Oyster Bay, Governor's Island, King's Bridge & Long Island Sound. The map is in very nice condition with a bit of toning and several folds. Margin at the lower left is close-trimmed to folding into the issue but without compromising the border.
The first article is a: "Debate on the Motion for Referring the Hessian Treaty to the Committee of Supply, Concluded: "which has much great discussion on using Hessian soldiers to assist in the war against America, beginning: "The method hitherto pursued to quell the rebellion in North America has proved ineffectual, because it was mild & gentle. We are not, however, to despair; more vigorous & better planned measures will have a different effect. I think there can be little doubt that the force intended is sufficient to subdue the colonies...There has not as yet been any regular engagement nor a fair trial of skill & courage between his Majesty's forces & the rebels..." with much more.
Regarding the strategic importance of Long Island, an article includes: "Long Island was scarce heard of on this side of the Atlantic before it was pointed out in the papers as a proper spot for landing the British forces, in order to reduce the Americans to obedience...(and) shews the situation of the island with respect to New-York, and that part of the continent which is now the immediate object of attack."
Another report mentions the July 5, 1776 meeting of the Virginia Convention which includes a list of appointments, among them: "Patrick Henry, jun. Esq; Governor...Benjamin Harrison of Berkley, Counsellor(s) of State...Edmund Randolph, Esq; Attorney General..." The report continues with a bit more about Patrick Henry being chosen for the governorship, as well as a list of ordinances passed by the Convention.
Another article has: "...some thoughts on the late declaration of the American Congress..." being the Declaration of Independence.
On another page has the passionate speech delivered by the President of the Provincial Congress of South Carolina to the Delegates for their service in the American Congress.
There is a detailed account headed: "An Authentic Account of the Attack on Sullivan's Island on the 28th of June By an Officer on Board the Fleet" which has much great detail & which takes nearly two pages, plus: "Sentiments & Principles of American Quakers".
Near the back is the: "Account of the Proceedings of the American Colonists since the Passing the Boston Port Bill", part of a continuing article which takes over 3 pages. It's primary focus is the reporting of a great account of the Battle of Long Island, the first major battle of the war following the Declaration of Independence. The report begins: "Unhappily for this country and for America, the terms of reconciliation have been rejected, the sword is drawn, and the slaughter of the people is begun. Success has attended his Majesty's arms at the first onset & the enemy has received a most signal defeat..." followed by an account of the Battle of Long Island. At its conclusion is the: "Return of Prisoners taken on Long Island, 27th August, 1776" with the report signed in type: W. Howe.
Complete in 48 pages, 5 by 8 1/4 inches, full title/contents page with an engraving of St. John's Gate, great condition.