Home > Back to Search Results > Early version of the Articles of Confederation...
Click image to enlarge 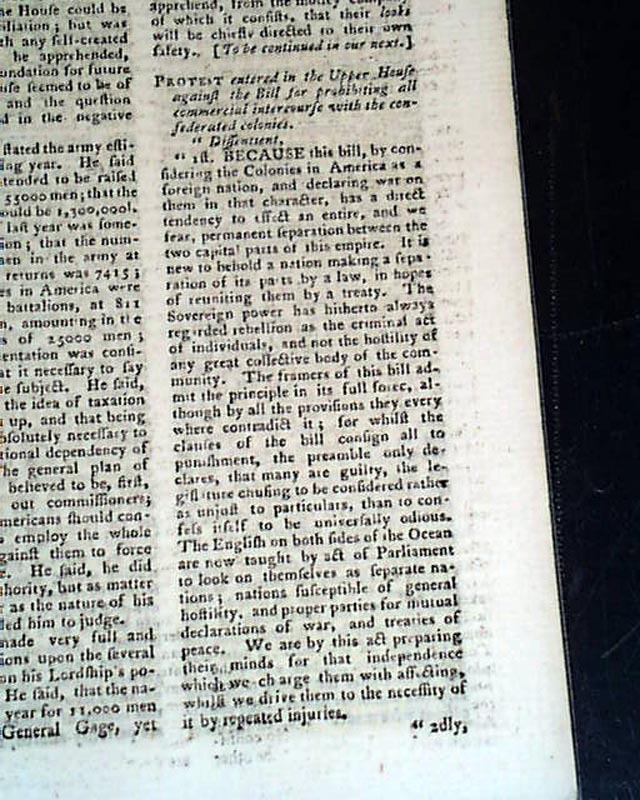 Early version of the Articles of Confederation...

Over three pages taken up with: "Protest entered in the Upper House Against the Bill for Prohibiting all Commercial intercourse with the Confederated Colonies" which is very good reading in defense of America. There is terrific & historic reading taking nearly 2 pages on what is an early version of the Articles of Confederation, being a plan to unite for: "...a firm league of friendship with each other...for their prosperity, for their common defence against their enemies, for the security of their liberties & properties...". The wording in this version of the Articles of Confederation involves different text but the same thought as the final version endorsed by Congress on Nov. 15, 1777 (photos show just portions of this text).

Four pages report on: "Proceedings of the American Colonies" including a great document from Boston stating in part: "...We, his majesty's loyal subjects of the town of Boston...now take this opportunity to profess our firm allegiance to his Majesty & entire obedience to his Government & laws...".  There is also an: "Extract of a letter from Montgomery" datelined at the camp before St. John's, Oct. 20, being the general's report which begins: "I have the pleasure to acquaint you with the surrender of Chamblee to Major Brown & Major Livingston, which last headed about 300 Canadians..." with more, taking nearly a full page.
Further on is a report which includes: "There are no advices from Boston later than the 12 of Oct., when Gen. Gage left it invested as before by the rebel army which, however, had attempted nothing since the affair of Bunker's Hill..." with much more. Yet another report includes: "A plan likewise of attacking the regulars at Boston by means of a floating battery is also said to have miscarried & many of the Provincials perished. A report has been propagated...that the Generals Washington & Lee had disagreed & that to reconcile the difference & restore harmony in the Provincial army, Dr. Franklin & other delegates had suddenly quitted Philadelphia & appeared at the headquarters at Cambridge..." & further on is: "The inhabitants of New Bern in North Carolina set the example to Gen. Howe of forming an Association of Loyalists by disarming all those who had refused to sign the Association of that Province..." with more. Fascinating reading! A very historic issue, particularly with this early version of the Articles of Confederation.
An article taking about 4 pages is titled: "Journal of the Resolution's Voyage on Discovery to the Southern Hemisphere..." has much detail on Captain Cook's voyage.
The plate called for is present.
Complete in 56 pages, 5 by 8 1/4 inches, the full title/contents page featuring an engraving of St. John's Gate, nice condition.