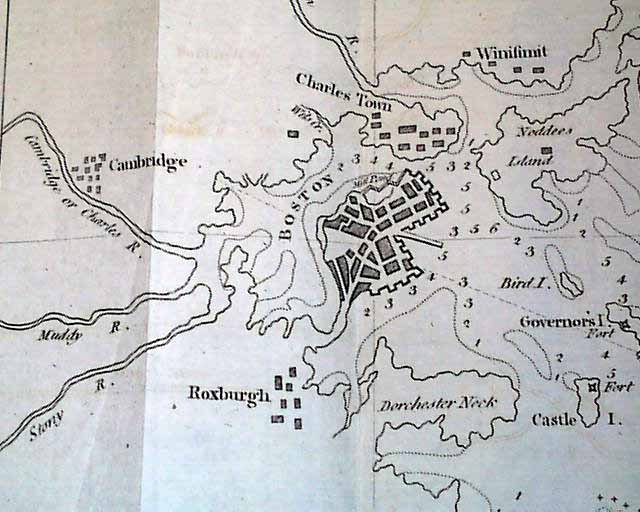 GENTLEMAN'S MAGAZINE, London, January, 1775  Certainly the prime feature of this issue is the nice foldout map titled: "A Plan of the Town and Chart of the Harbour of Boston Exhibiting a View of the Islands, Castle Forts, and Entrances into the said Harbour." which measures 12 1/2  by 14 inches with wider margins than typically found. The map is in very nice condition with very little ink off-setting from having been folded into itself for over 240 years. The margin at the lower right is trimmed a bit for folding into the issue, but the border is not compromised.
The map is extremely displayable & rarely found in such nice condition, if present at all.
This issue also has a nice variety of pre-Revolutionary War content including a "Genuine Copy of the Petition from the American General Congress to his Majesty".
The explicit but deferentially-worded petition, which is quite detailed taking close to 3 pages, contains a list of grievances and more, and closes with: "We therefore most earnestly beseech your Majesty, that your royal authority and interposition may be used for our relief; and that a gracious answer may be given to this petition...", signed in type: Henry Middleton, the President of the Congress.
Also included is the "Address of the American Delegates, in general Congress assembled, to the Inhabitants of the Province of Quebec", plus there is a proclamation issued by General Gage directed at the Massachusetts Provincial Congress, stating in part: "...it [is] my duty to issue this proclamation...in his Majesty's name...prohibiting all his...subjects within this province, from complying, in any degree, with recommendations, directions or resolves of the aforesaid unlawful assembly...", signed in type: Tho. Gage.
From "Williamsburgh" is a report with numerous particulars of the battle "fought on the Ohio" on the 10th of October, which resulted in the defeat of the "...united tribes of the Shawanese, Delawares, Mingoes, Tawas and several other nations...", better known as the battle of Point Pleasant.
The mentioned map is the only plate called for.
Complete in 48 pages, 5 1/4 by 8 1/4 inches, full title/contents page with an engraving of St. Johns Gate, very nice condition. As might be imagined, maps of the colonies from the Revolutionary War era are very scarce & desirable.