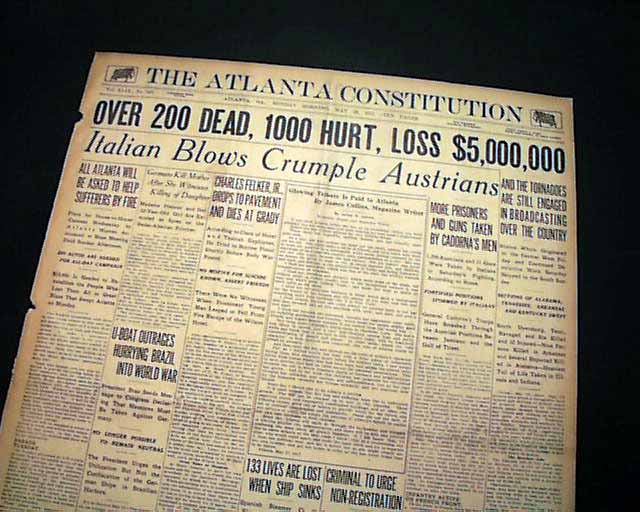 * Mattoon, IL tornado outbreak
* One of the deadliest tornado sequences on record

The front page has the displayable banner headline: "OVER 200 DEAD, 1000 HURT, LOSS $5,000,000", with several related subheadings and supporting text. This multi-day tornado event remains one of the deadliest on record.
Other news, sports and advertisements of the day are found throughout.
Ten pages, some edge-chipping and light browning, a rough, loose left spine, but otherwise good. Should be handled with care.

Background (Wikipedia):The tornado outbreak sequence of May–June 1917 was an eight-day tornado event, known as a tornado outbreak sequence, that killed at least 383 people, mostly in the Midwestern and parts of the Southeastern United States. It was the most intense and the longest continuous tornado outbreak sequence on record, with at least 66 tornadoes including 15 that were analyzed to have been violent (F4–F5) based upon reported damage. The deadliest tornado of the entire sequence produced a 155-mile (249 km) track across Illinois, killing 101 people and devastating the towns of Charleston and Mattoon along with small farming communities. Once believed to have traveled 290-mile (470 km) cross Illinois and into Indiana, it is now assessed to have been a tornado family of four to eight separate tornadoes.