Home > Back to Search Results > Trial of the Lincoln assassination conspirators...
Click image to enlarge 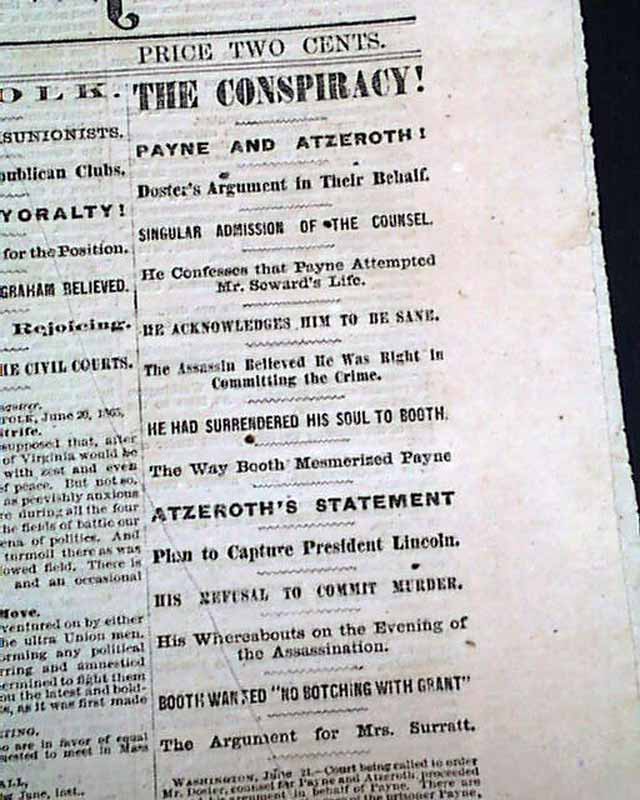 Trial of the Lincoln assassination conspirators...


THE PHILADELPHIA INQUIRER, June 22, 1865  The front page has a nice stack of one column headlines concerning the trial of the assassins, including: "THE CONSPIRACY ! " Payne & Atzeroth!" "Doster's Argument in Their Behalf" "He Confesses that Payne Attempted Mr. Seward's Life" "He Acknowledges Him to Be Sane" "The Assassin Believed He Was Right in Committing the Crime" "He Had Surrendered His Soul to Booth" "The Way Booth Mesmerized Payne" "Atzeroth's Statement" "Plan to Capture President Lincoln" "His Refusal to Commit Murder" "Booth Wanted 'No Botching With Grant' " "The Argument for Mrs. Surratt".
The text takes the remainder of the column and carries over to take more than half of the back page.
Complete in 8 pages, never bound nor trimmed (desired) so it folds out to one large sheet, minor wear at the margins, generally nice condition.