Home > Back to Search Results > Fine reporting in this first report of Lincoln's assassination...
Click image to enlarge 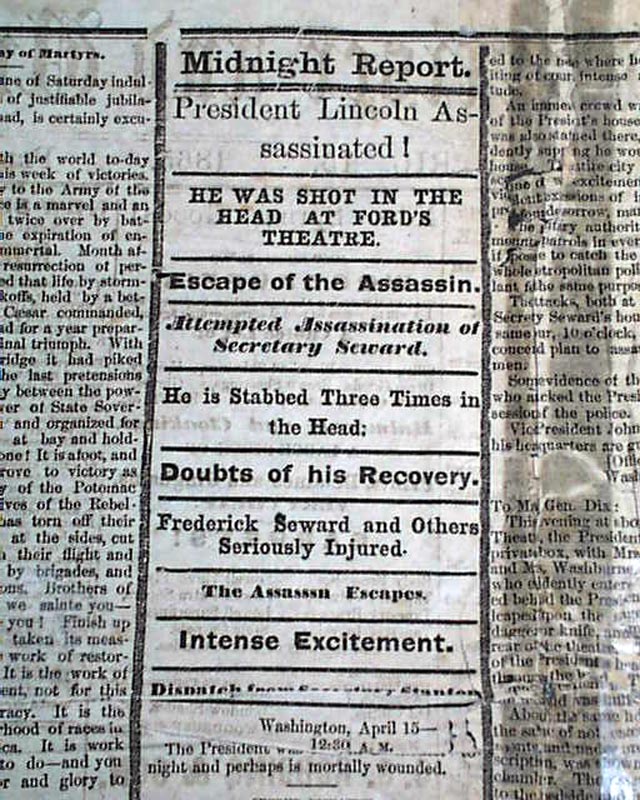 Fine reporting in this first report of Lincoln's assassination...

An exciting issue reporting the assassination of Abraham Lincoln, as inside pages have various dispatches as the news was received at the printing office.
Page 2 begins with a report from the editor headed: "Assassination of President Lincoln" beginning: "We are overwhelmed with range shocking intelligence of the assassination of President Lincoln...Discovered documents indicate that it was a conspiracy intended to have been executed on the fourth of March...We can imply no words at all adequate to express either our indignation at the instigators and perpetrators of this foul deed, or our sorrow for this great national calamity..." with more.
The third column has heads; "President Lincoln Assassinated!" "He Was Shot In The Head At Ford's Theatre" "Escape of the Assassin" "Attempted Assassination of Secretary Seward" "He is Stabbed Three Times in the Head" "Doubts off His Recovers" "The Assassin Escapes' "Intense Excitement" and more.
The first dispatch reads: "The president was shot in a theater tonight and perhaps is mortally wounded." followed by the "Second Dispatch" reading: "The President is not expected to live through the Night. He was shot at a theater." It is followed by many more dispatches as the news was received, concluding with a brief yet notable report: "Abraham Lincoln died this morning at 20 minutes after 7 o'clock."
Then page 3 includes: "The Nation's Calamity" and: "The Latest--Rumored Arrest of Booth" "Condition of the Injured Parties" with the latest details.
This is at best a "2nd rate" issue, being complete in four pages but with various old tape mends as well a various recent archival mends. Some tears, some creases, with very little (if any) text loss. Terrific content, but considering the condition priced dramatically less than a more typical first report of Lincoln's assassination.