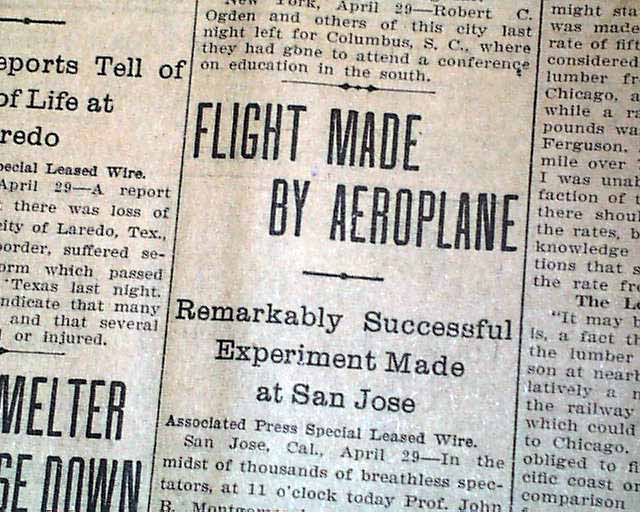 1st public showing of a airplane flight in U.S....

The front page has a one column heading: "FLIGHT MADE BY AEROPLANE" with subhead. (see) Surprisingly this issue is in good condition being from the "wood pulp" era. Very hard to find issues that are not totally fragile from this era in paper.
Complete with 6 pages, 2 small library stamps within the masthead, a little irregular along the spine, generally nice.

wikipedia notes: On April 29, 1905, Maloney made a public exhibition at Santa Clara College as Montgomery’s aeronaut. By this time the glider had been re-christened as The Santa Clara in honor of the college. With a large crowd and members of the local press on hand, Maloney released at an estimated 4,000 feet above ground level, and glided in full control for roughly 20 minutes to a perfect landing a predetermined location. This flight was the first public exhibition of a controlled heavier-than-air flying machine in the United States. Maloney and Montgomery made repeated demonstrations of the glider at various locations in the Bay area in the spring of 1905 with varying degrees of success owing to the complicated nature of hoisting the balloon aloft with a glider tethered beneath.