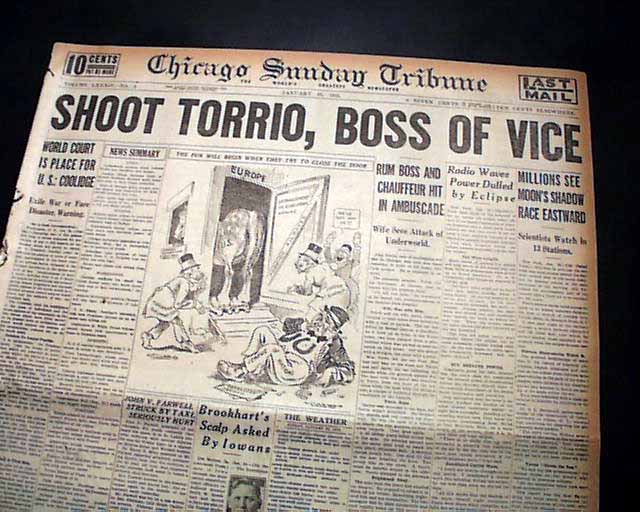 The top of the front page has a terrific banner headline: "SHOOT TORRIO, BOSS OF VICE" with subheads. (see) First report coverage on the assassination attempt of Chicago mob boss Johnny Torio. Reporting continues on page four with 2 related photos. Torrio was shot five times and escaped death as the gun jammed on the 6th and fatal head shot attempt by O'Banion gangsters. Al Capone made a visit to his mentor in the hospital and Torrio told him he was done and gave Capone total control of the Chicago Outfit. Great to have in this World famous Chicago publication. Very rare as such.

wikipedia notes: Torrio headed an essentially Italian organized crime group that was the biggest in the city, with Capone as his right-hand man. He was wary of being drawn into gang wars and tried to negotiate agreements over territory between rival crime groups. The smaller North Side Gang led by Dean O'Banion (also known as Dion O'Banion) was of mixed ethnicity, and it came under pressure from the Genna brothers who were allied with Torrio. O'Banion found that Torrio was unhelpful with the encroachment of the Gennas into the North Side, despite his pretensions to be a settler of disputes. In a fateful step, Torrio either arranged for or acquiesced to the murder of O'Banion at his flower shop on November 10, 1924. This placed Hymie Weiss at the head of the gang, backed by Vincent Drucci and Bugs Moran. Weiss had been a close friend of O'Banion, and the North Siders made it a priority to get revenge on his killers.
In January 1925, Capone was ambushed, leaving him shaken but unhurt. Twelve days later, on January 24, Torrio was returning from a shopping trip with his wife Anna, when he was shot several times. After recovering, he effectively resigned and handed control to Capone, age 26, who became the new boss of an organization that took in illegal breweries and a transportation network that reached Canada, with political and law-enforcement protection. In turn, he was able to use more violence to increase revenue. An establishment that refused to purchase liquor from him often got blown up, and as many as 100 people were killed in such bombings during the 1920s. Rivals saw Capone as responsible for the proliferation of brothels in the city.
In late 1925, Torrio moved to Italy, where he no longer dealt directly in mob business, with his wife and mother. He gave total control of the Outfit to Capone and said, "It's all yours, Al. Me? I'm quitting. It's Europe for me". Torrio left a criminal empire which grossed about $70,000,000 a year ($997,500,000 in 2018 dollars) from bootleg booze, gambling and prostitution.