Home > Back to Search Results > King of England's announcement of the Treaty of Amiens...
Click image to enlarge 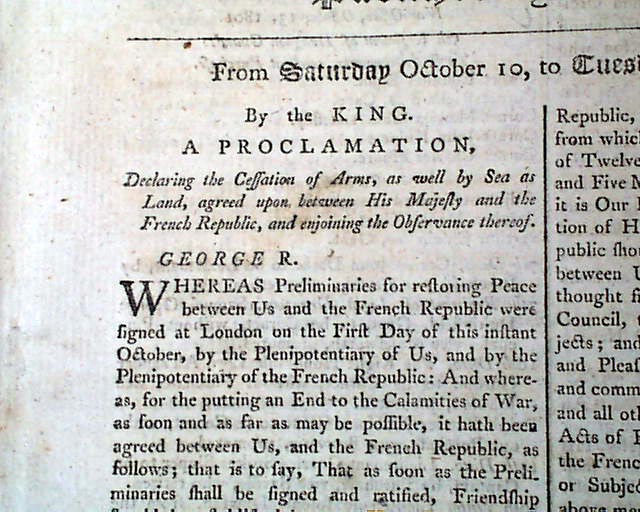 King of England's announcement of the Treaty of Amiens...

Most of the front page is taken up with: "By the King, A PROCLAMATION, Declaring the Cessation of Arms, as Well by Sea as Land, Agreed upon between His Majesty and the French Republic, and Enjoining the Observance thereof."
This is the King of England's formal announcement that the Treaty of Amiens had been signed on October 1 and ratified by both countries on October 10.
The Treaty of Amiens temporarily ended hostilities between France and England at the end of the War of the Second Coalition. It marked the end of the French Revolutionary Wars, but after a short peace it set the stage for the Napoleonic Wars.
See the photo for the brief--yet very historic--announcement.
"Extraordinary" issues were created to put reports of significant events into the hands of the people before waiting until the next regularly scheduled issue would be printed. And great for this report to be in this very famous title which was essentially the "mouthpiece" of Parliament and the Royal Family.
Complete in ten pages, 7 by 11 inches, partial red tax stamp on the front page, great condition.