Home > Back to Search Results > Kennedy vs. Nixon...
Click image to enlarge 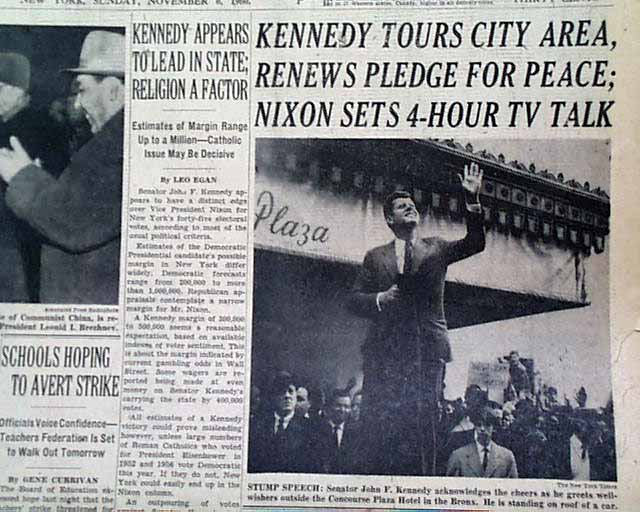 The front page has: "KENNEDY TOURS CITY AREA, RENEWS PLEDGE FOR PEACE; NIXON SETS 4-HOUR TV TALK", "KENNEDY APPEARS TO LEAD IN STATE; RELIGION A FACTOR", with additional related articles. Coverage then continues on the front page of section 4 with dramatic stump speech images of both candidates. Finally, the New York Times Magazine section has many articles and images covering the election including: "Why I am Voting For -- and Against --, the Case for Nixon, The Case for Kennedy" and "Evolution of a President", with 4 pages covering the candidates from birth through the campaign. This issue is chocked full of coverage on both candidates just 2 days before election day.

The issue is believed to be complete, but is being offered for the described content. A bit of roughness to the front page (see images, however no described content is impacted. There are many displayable images and other than the 1st section, the issue is in good condition - especially the featured magazine section.