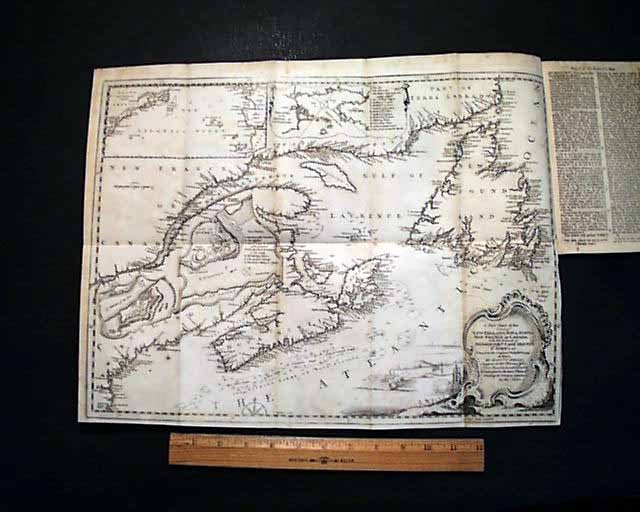 Certainly the prime content in this issue is the quite large foldout map titled in the ornate cartouche: "A New Chart of the Coast of NEW ENGLAND, NOVA SCOTIA, NEW FRANCE or CANADA with the Island of Newfoundland, Cape Breton, St. John's, etc...". The map show much great detail of this portion of present-day Canada, from Labrador to Boston, including towns at the eastern edge of Massachusetts & other portions of New England including Salem, Manchester, Salisbury, Marblehead, Charlestown, Cambridge, Kenebec, etc. There is nice detail of the "City of Quebec" in an inset, as well as a more expansive inset in the upper left showing the eastern portion of North America south to Cape Fear & including portions of England, Ireland, Spain, France, & Africa. An inside of the: "Plan of the City & Port of Louisbourg" as well.
This map folds out to measure 14 1/2 by 18 1/2 inches and is in uncommonly nice, clean condition with virtually no edge or fold tears which typically plague such large maps. Accompanying the map is a detailed article concerning the: "...Maps drawn for...History of New France..." which takes over six pages, very descriptive of the eastern portion of Canada.
Other items of interest in this issue include reports on the Jacobite Rebellion with: "Rebels' Account of the Battle of Falkirk" "Progress of the King's Forces in Scotland" "Account of the Surrender of the Town of Stirling" and "The Duke of Perth's Speech to the Young Pretender". Also: "Account of a Voyage to Lapland" which takes nearly 3 pages.
Complete in 54 pages, 5 by 8 inches, full title/contents page with an engraving of St. John's Gate. Tiny binding holes at the blank spine margin, a bit irregular at the spine, small library stamp at the bottom margin of 3 leaves as well as the back of the map, otherwise in nice condition.