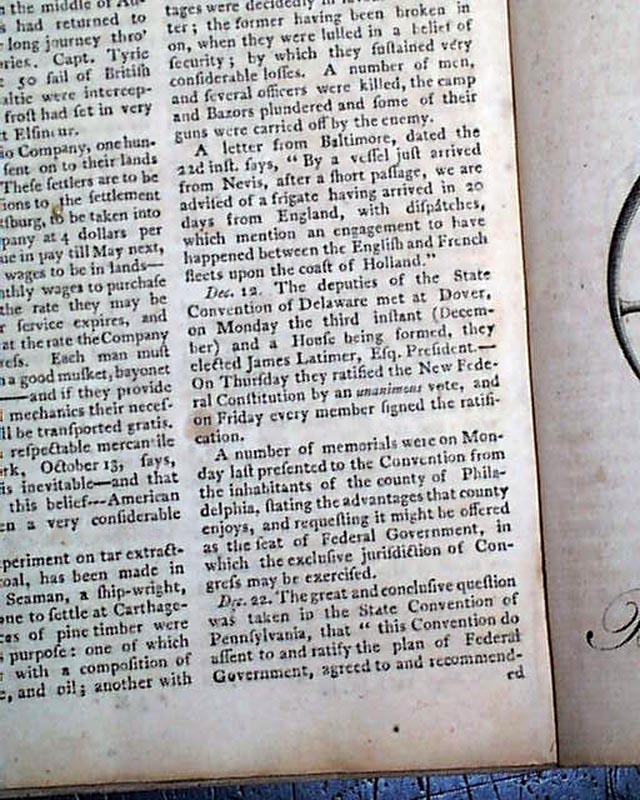 The first article in this issue is: "A Description of Boston".
Near the back of the issue is "Intelligence" which has the latest news reports of the day, including an historic one noting: "The deputies of the state Convention of Delaware met at Dover on Monday the third...and a House being formed, they elected James Latimer, Esq. President. On Thursday they ratified the New Federal Constitution by an unanimous vote, and on Friday every member signed the ratification."
Delaware was the first state to ratify the Constitution. This is followed by a report of the second state to do so: "The great & conclusive question was taken in the State Convention of Pennsylvania that 'this Convention do assent to and ratify the plan of Federal Government agreed to and recommended by the late Federal Convention!'..." followed by the list of the Yea" and "Nay" votes.
Keep in mind that the Constitutional Convention was in Philadelphia, the city where this magazine was published making this a noteworthy issue.
The only plate present is "The Draught of a New Invented Drill Plough".
Complete in 52 pages, full title/contents page, 5 by 8 inches, nice condition.