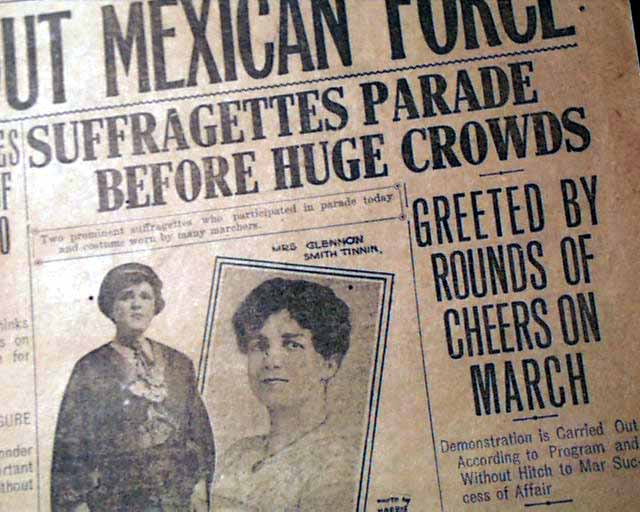 The front page has a three column heading: "SUFFRAGETTES PARADE BEFORE HUGE CROWDS" with subheads and related pictorial. (see) Surprisingly this issue is in good condition being from the "wood pulp" era. Very hard to find issues that are not totally fragile from this era in paper.
Complete with 22 pages, two small library stamps within the masthead, a little irregular along the spine, generally nice.

wikipedia notes: The Woman Suffrage Procession, in 1913, was the first suffragist parade in Washington, D.C. It was also the first large, organized march on Washington for political purposes. The procession was organized by the suffragists Alice Paul and Lucy Burns for the National American Woman Suffrage Association (NAWSA). Planning for the event began in Washington in December 1912. The parade's purpose, stated in its official program, was to "march in a spirit of protest against the present political organization of society, from which women are excluded."
Participation numbers vary between 5,000 and 10,000 marchers. Suffragists and supporters marched down Pennsylvania Avenue on Monday, March 3, 1913, the day before President Woodrow Wilson's inauguration. Paul had selected the venue and date to maximize publicity, but met resistance from the D.C. police department. The demonstration consisted of a procession with floats, bands, and various groups representing women at home, in school, and in the workplace. At the Treasury Building, a pageant of allegorical tableaux was acted out during the parade. The final act was a rally at the Memorial Continental Hall with prominent speakers, including Anna Howard Shaw and Helen Keller.