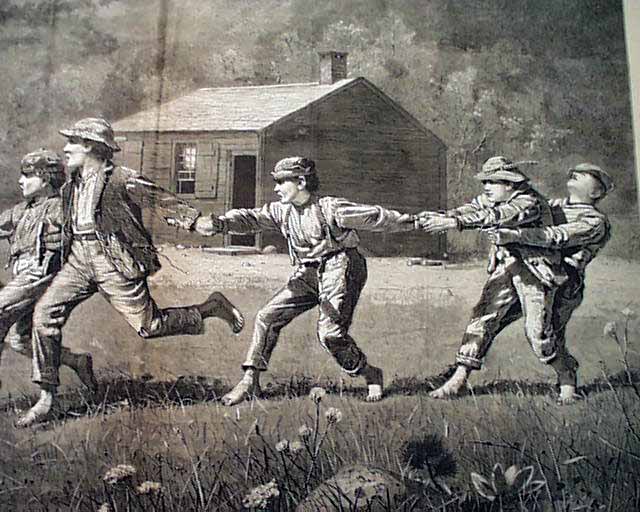 
HARPER'S WEEKLY, New York, September 20, 1873 (at a reduced price)   This issue has a double page centerfold titled: "Snap The Whip" done by famed artist Winslow Homer. This print, considered by many to be the most desirable illustrations done by Homer to appear in Harper's Weekly--and arguably the most desired issue from the 60 year run of the newspaper--features several young boys playing snap-the-whip in a schoolyard (see). Another page has a brief article about the illustration, and a related poem (see). Minor archival mends to the reverse of the top & bottom margins at the central fold, slightly affecting the caption but nothing in the print. There are no binding holes at the central fold, which is a plus.
Other illustrations include, on the front page: "The New School-Mistress", a fullpg. inside: "Saved" being a life-saving scene on a beach, plus a halfpg. of University Hall on the campus of Northwestern University, & a report about this institution.