Home > Back to Search Results > Creation of the United States Marine Corps, from the city where it happened...
Click image to enlarge 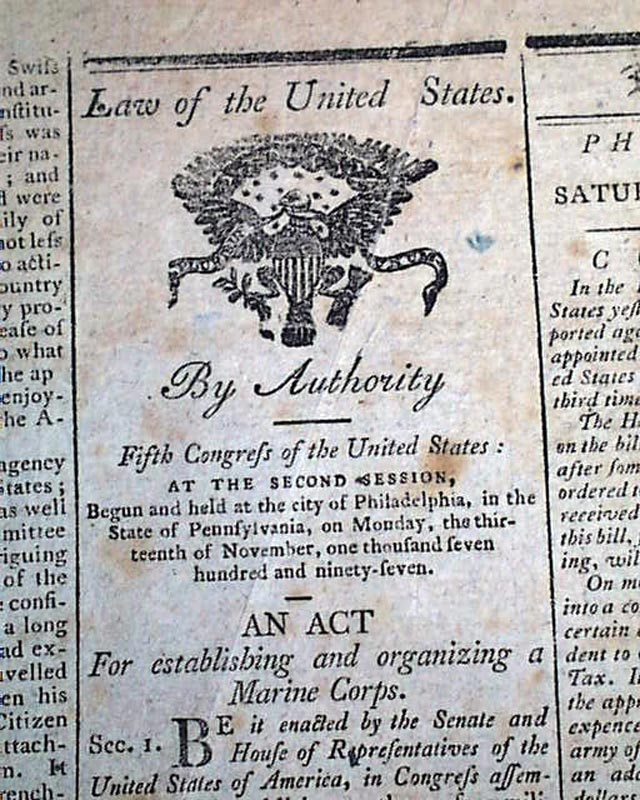 Creation of the United States Marine Corps, from the city where it happened...


GAZETTE OF THE UNITED STATES & PHILADELPHIA DAILY ADVERTISER, July 14, 1792  A very historic issue on the history of the United States military. Specifically, it contains the Act of Congress formally creating the Marine Corps.
Taking an entire column on page 2, and headed with an engraving of a heraldic eagle, is: "AN ACT For Establishing and Organizing a Marine Corps" signed in type at its conclusion by the President: John Adams, dated July 11, 1798.
Great to have this report in a newspaper from the federal capital at the time.
There are various websites acknowledging the formal creation of the U.S. Marines on July 11, 1798, establishing it as an independent branch of the U.S. military.  Nov. 10, 1775 may be the commonly celebrated birthday of the Marine Corps, but it wasn't actually established as its own branch until 23 years later.
This issue is compromised by having an upper corner of the back leaf missing (see photos), but fortunately this is not close to the Marine Corps Act on page 2, nor does its affect another unrelated document signed by President John Adams on page 3.
Otherwise complete in four pages, archivally rejoined at the spine, never-trimmed margins.