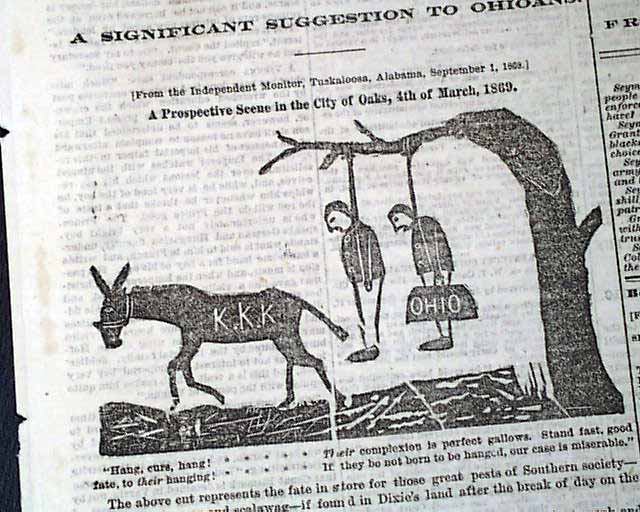 The front page features a terrific, large & quite unusual anti-Seymour political cartoon (ran against U.S. Grant for President), with two column heads: "Spirit Of The Southern Democratic Press" "Rebel Illustration of Scenes When Seymour Is Inaugurated" "Immigrants From Ohio To Alabama Warned Of Their Doom" "The Seymour Peace Platform Displayed" "Proposed Rebel Festivities on Seymour's Inauguration Day" "A Significant Suggestion To Ohioans".
The illustration has a heading: "A Prospective Scene In The City of Oaks, 4th of March, 1869" which is the day of the presidential inauguration. But obviously Grant won the election. The text begins: "The above cut represents the fate in store for those great pests of Southern society--the carper-bagger and scalawag--if found in Dixie's land after the break of day on the 4th of March next...".
Eight pages, nice condition.