Home > Back to Search Results > Great issue from the middle of the Revolutionary War...
Click image to enlarge 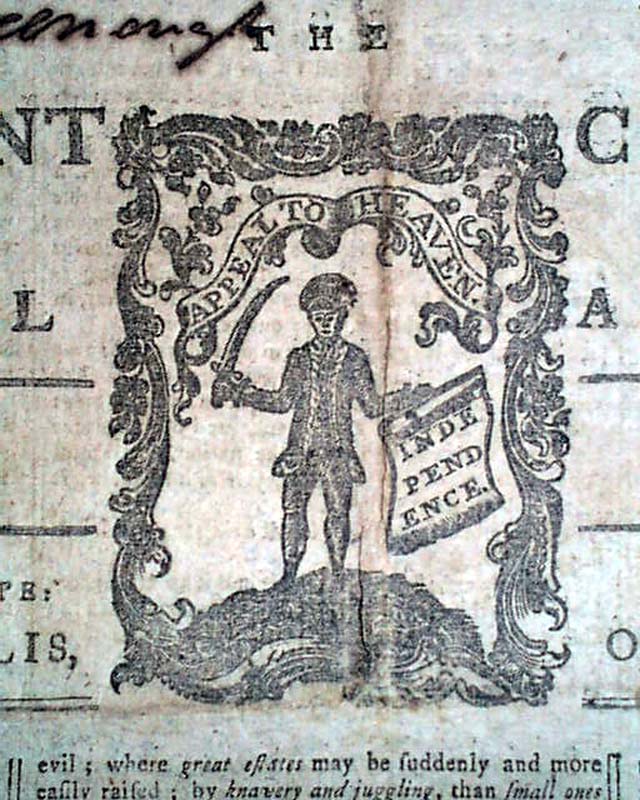 Great issue from the middle of the Revolutionary War...


THE INDEPENDENT CHRONICLE & UNIVERSAL ADVERTISER, Boston, June 18, 1778  The masthead features a terrific engraving taken from one done by Paul Revere (for colonial currency) showing a patriot with a sword in one hand and a scroll marked "Independence" in the other, above which is a scroll: "Appeal To Heaven".
Page 2 has much reporting from Parliament including some discussion on taxing the colonies, & noting: "...The only excuse...I have ever heard for the right of parliament to tax the Colonies, & of course for this nefarious war...". Page 3 has an item from Halifax: "...before May next there will be a revolt in that colonial, all ranks of people seeming inclined in favour of the Americans except a few who hold places under the government...strongly reported there that General Howe was blocked up in Philadelphia  by Gen. Washington's army..." and "...plans are now talked of...To declare the American independent and to treat with them as allies, by which measures...a war will be avoided..." and a letter from General Burgoyne mentioning: "...that no troops on earth ever attacked with more fury or with more military skill than he attacked even in his trenches by Gates; that he was aware of the difficulties his march would draw him into...censures...General Howe for not sending him support...". Also: "Dr. Franklin, with his son, paid a visit lately to Mr. Voltaire...asked him what he thought of the American confederacy? The poet answered him, that he had so good an opinion of it that if it had taken place 40 years ago he would have established himself in so free a country."
Also an interesting item: "It was reported yesterday that Sir William Howe had brought Washington to an engagement, beat him and took him prisoner; but this requires confirmation. True!" Another item mentions the treaty between France & America, and that Mr. Adams arrived in Paris & visited Ben Franklin; a report of 500 soldiers from England destined for America. An item from Boston notes: "...from head quarters we are to9ld that his Excellency General Washington had given orders for the whole grand army to march towards Fish Kill to watch the enemy's motion..."; and an item concerning the actions of Sir Henry Clinton.
Other tidbits include: "Dr. Franklin is the idol of Paris. All ages and sexes join in his praise, and the ladies strive most..."; mention of Franklin & other ambassadors meeting the French royal family; "It is expected Holland will be the next power to recognize the independence of America...was delivered from the court of Spain, recognizing the independence of America..." & "...accounts from Philadelphia it appears that the enemy will undoubtedly abandon that place very soon..."; a report of British brutality in Albany; and even more.
A terrific issue with a great wealth of Revolutionary War content. Four pages, never bound nor trimmed, a bit irregular at the margins and a few discrete archival mends inside, generally nice condition.