Home > Back to Search Results > Latest war news from the middle of the Revolutionary War...
Click image to enlarge 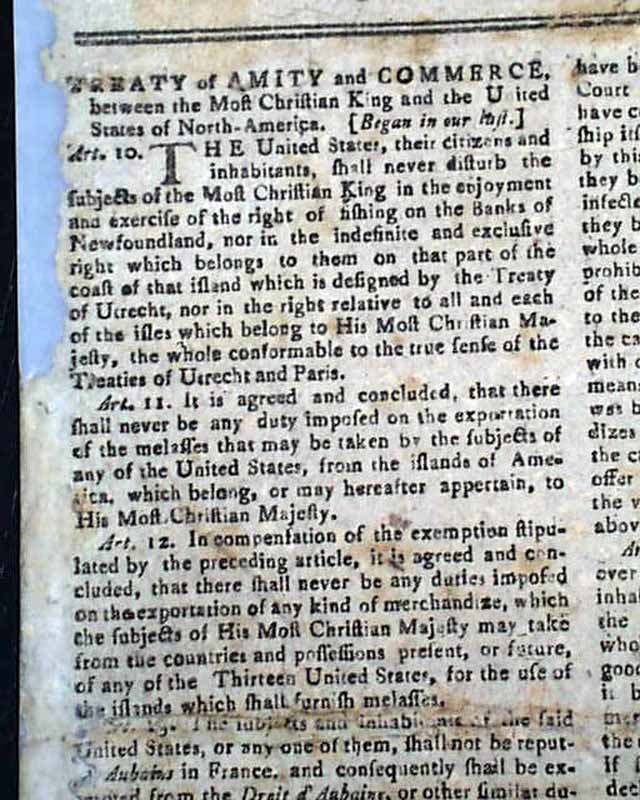 Latest war news from the middle of the Revolutionary War...


THE PROVIDENCE GAZETTE & COUNTRY JOURNAL, Rhode Island, Dec. 26, 1778  The entire front page and half of page 2 are taken up with the  second half of the: "Treaty of Amity and Commerce Between the Most Christian King and the United Starters of North America", this being the treaty of assistance between French and the colonies, which did much to support the American cause against the British and eventually lead to victory within 3 years.
At its conclusion if it signed in type by the American agents: C. A. Gerard, B. Franklin, Silas Deane, and Arthur Lee.
Page 2 also has reports of the military action involving General Morgan in West Florida, Natchez, Pensacola, & the vicinity. Some editorial commentary on the war as well.
Page 3 has more war reporting, a few bits including: "...from New York...are informed that ten men from Gen. Burgoyne's army had...arrived....from up the North River...intelligence that upwards of 400 of their suffering comrades were in a wood...having seized part of their guard & were waiting for relieve...at Verplank's Point, near King's Ferry..." with more. Also a letter to Lord Dunmore at New York, as can be seen in the photos.
Four pages, archival strengthening at the spine with some spine loss to the top one-third affecting some words on page 2 only, untrimmed margins, rubbing at a front page fold affects a few letters in the dateline. Scattered foxing.