Home > Back to Search Results > Great issue on the Battle of Monmouth...
Click image to enlarge 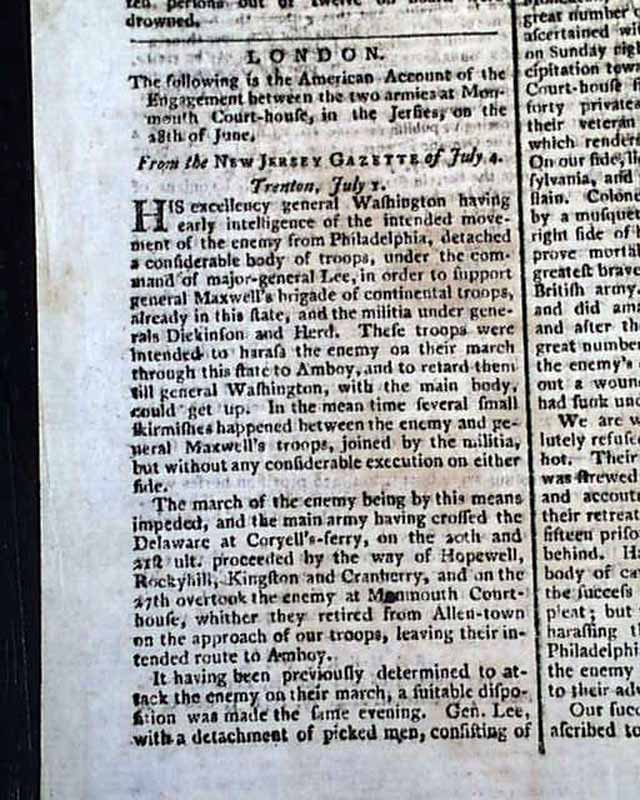 Great issue on the Battle of Monmouth...

Almost half of page 2 is taken up with a fine account of the Battle of Monmouth, as reported in the "New Jersey Gazette".
The report begins: "His excellency general Washington having early intelligence of the intended movement of the enemy from Philadelphia..." with much more and including much detail on this historic battle. Near the end is: "Our success, under heaven, is to be wholly ascribed to the good disposition made by his excellency, supported by the firmness & bravery of both officers & men..." with more.
Also relating to the Battle of Monmouth are two back page letters signed in type by Charles Lee. Washington was furious with Lee for ordering a retreat, and Lee would be dismissed from the army in 1780 after being found guilty of disobedience. These two letters by Lee give his version of his actions in a response to criticism for his actions.
Page 2 also has a report from Boston which begins: "On Wednesday was shot by a centinel of the guards at Prospect hill, Lt. Brown...The unfortunate officer treated the centinel with contempt insisted on passing without giving any reason for so doing...shot him through the head. The prisoners who were near seized the centinel & dragged him by the heels up the hill which tore his face considerably...". And this is followed by a letter from General Phillips to General Heath at Cambridge beginning: "Murder & death at length has taken place. An officer riding out from the barracks on Prospect hill has been shot by an American centinel...I demand liberty to send an officer to Gen. Sir Henry Clinton, by way of the head quarters of General Washington, with my report of this murder...".
Another page has a letter dated from Paris, May 18, 1778, being signed in type by both: B. Franklin and John Adams, concerning French ships on their way to America.
Eight pages, 8 1/2 by 11 1/4 inches, very nice condition.