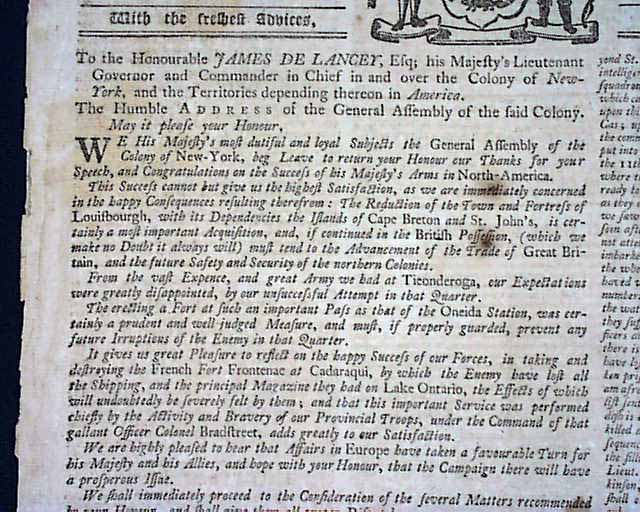 The front page features a very nice Address to the Lt. Governor & Commander in Chief of the colony of New York from the General Assembly concerning the French & Indian War, set in larger than normal type and taking two-thirds of the width of the page.
It contains nice content as well, including: "...congratulations on the success of his Majesty's arms in North America...The reduction of the town & fortress of Louisbourgh...is certainly a most important acquisition &, if continued in the British possession...must tend to the advancement of the trade of Great Britain...From the vast expense & great army we had at Ticonderoga, our expectations were greatly disappointed by our unsuccessful attempt in that quarter..." with much more.
The balance of the ftpg. is taken up with various naval exploits of the British off the coast of Britany in France. Similar coverage carries over to take most of pg. 2.
Page 2 also has a report under a Philadelphia dateline with a military skirmish which begins: "That on the 12th instant, Colonel Washington, being out with a scouting party, fell in with a number of the enemy about 3 miles from our camp whom he attacked...That on hearing the firing at Loyalhanning, Colonel Mercer with a party of Virginians was sent out to the assistance of Colonel Washington..." with much more on this battle.
Very early & rare mention of George Washington in battle during the French & Indian War!
But perhaps the most intriguing item with the issue is the rare tax stamp which appears on pg. 2 (see photo), as such tax stamps rarely appear in American newspapers of this vintage.
This would appear to be the first leaf of a two leaf newspaper. Some staining near the center of the leaf & a few foxing spots, otherwise in very nice condition.