Home > Back to Search Results > Secretariat - the Preakness controversy...
Click image to enlarge 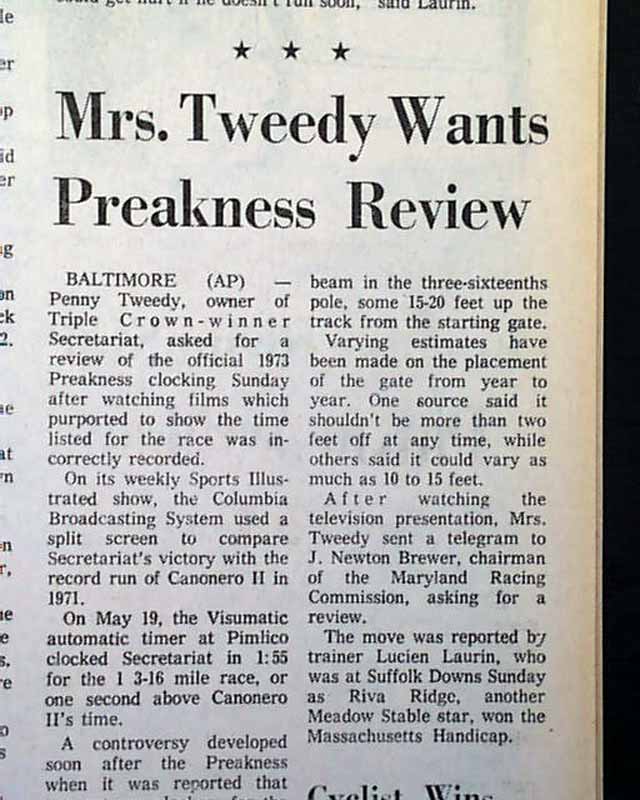 
THE SPRINGFIELD UNION, Springfield, Massachusetts, June 18, 1973  The sports section carries an article "Mrs. Tweedy Wants Preakness Review", owner of Triple Crown-winner, Secretariat, asked for a review of the official 1973 clocking after watching films which show the time listed for the race was incorrectly recorded. "A controversy developed soon after the Preakness when it was reported that two veteran clockers for the Daily Racing Form... had individually clocked Secretariat in 1:53 2-5", while the Visumatic automatic timer at Pimlico clocked Secretariat in 1:55. Two days later, the Maryland Racing Commission lowered the official time to the 1:54 2-5 time which had been recorded by Pimlico's official timer.  Another article on this page is "Mrs. Tweedy Talks to the animals - Secretariat and Riva, That Is". Other news, sports and advertisements are within the issue.