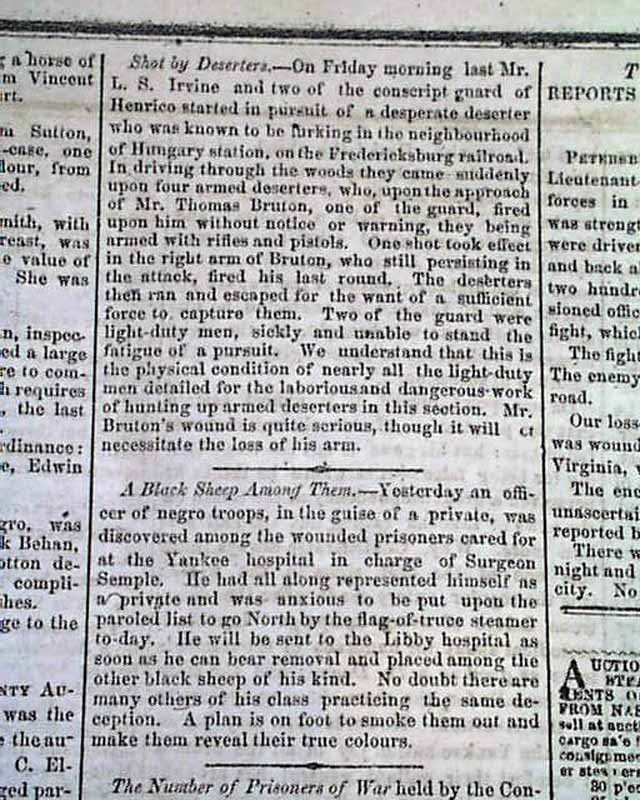 RICHMOND EXAMINER, Virginia, August 22, 1864
* From the capital of the Confederacy
* Multiple war reports
A nice newspaper from the capital of the Confederacy, the city to which all war report would eventually be sent and typically find the way to the printed page. The front page includes: "The War News" with many subheads including: "The Enemy Driven  Out of the Valley--A Complete Little Victory in Florida--The North Side--The Doubts  Cleared Up.." and more. Also: "The Dueling Case Before the County Authorities" "From Petersburg & other smaller items.
The back page begins with the always interesting editorial, beginning: "All round the horizon our sky is brightening. General Grant's movements, both to the right & to the left, in order to break out of his uneasy situation, have been most signal failures..." with much more. Also on the bkpg: "General Johnston--Facts" "Latest News From The North" "From Petersburg--The Fight on the Weldon Railroad" "Secretary Trenholm on the Finances" & some smaller items.
Complete as a single sheet newspaper with a one column masthead, typical with newspapers from the South late in the war as most paper mills were in the North. Very nice condition.