Home > Back to Search Results > Details on the Presidential election of 1796...
Click image to enlarge 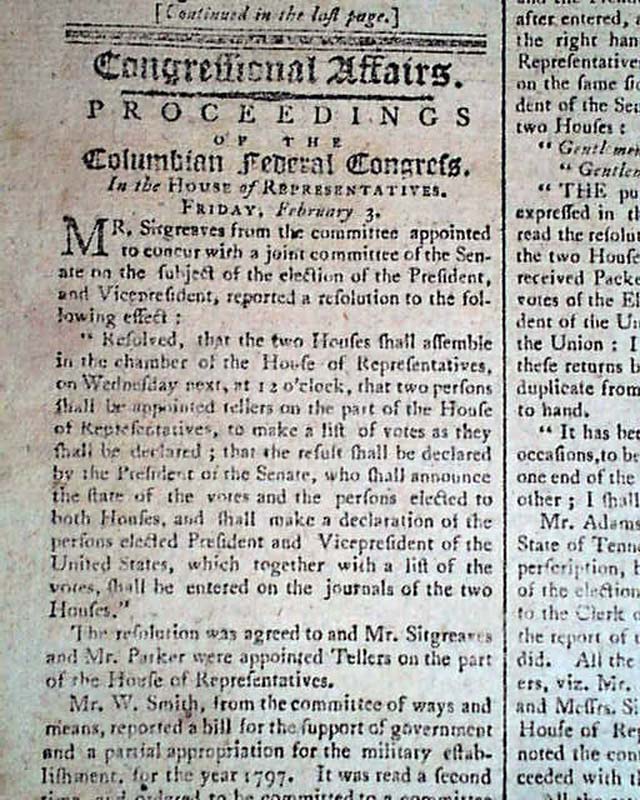 Details on the Presidential election of 1796...

Page 2 has a report from the "Proceedings of the Columbian Federal Congress" concerning the process for tallying votes for President & Vice President: "...that the two Houses shall assemble in the chamber of the House of Representatives on Wednesday next, at 12 o'clock, that two persons shall be appointed tellers...to make a list of votes...that the result shall be declared by the President of the Senate who shall announce the state of the votes & the persons elected...President and Vice President of the United States...".
Further on is the report from that Wednesday which gives the details of the process for counting the votes, and then reports: "...The President of the Senate then thus address the two Houses: ...There are 71 John Adams, 68 for Thomas Jefferson...I declare that JOHN ADAMS is elected President of the United States for four years, to commence on the 4th day of March next; and that THOMAS JEFFERSON is elected Vice President of the United States for four years..." with more.
This is one of the more detailed accounts of the announcement of a Presidential election I have seen.
Four pages, minor foxing, very nice condition.