Home > Back to Search Results > George Washington is elected President of the United States...
Click image to enlarge 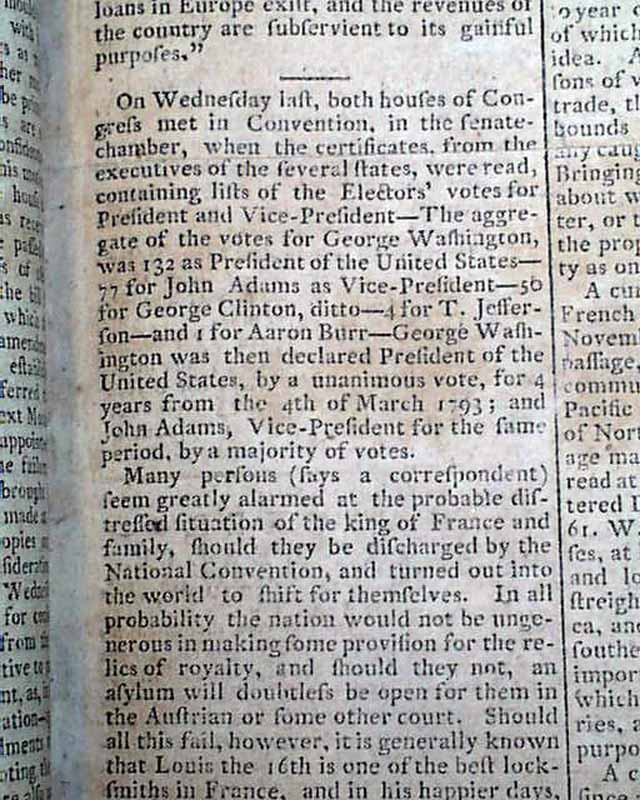 George Washington is elected President of the United States...

Nearly three-quarters of the front page is taken up with an address: "To ALEXANDER HAMILTON, Secretary of the Treasury of he United States". This is followed, on page 2, with a second analysis of America's financial situation.

But by far the most significant item in this issue is the page 3 report announcing the opening of the votes for President & Vice President.
History tells us that it was on February 13, 1793, when Congress officially tabulated the votes from the election of 1792.  Page 3 has a report datelined February 20 which states: "On Wednesday last [the 13th] both houses of Congress met in Convention in the senate chamber, when the certificates from the executives of the several states were read containing lists of the Electors' votes for President and Vice President---The aggregate of the votes for George Washington was 132 for President of the United States--77 for John Adams as Vice President--50--for George Clinton, ditto--4 for T. Jefferson--and 1 for Aaron Burr--George Washington was then declared President of the United States by a unanimous vote, for 4 years from the 4th of March 1793; and John Adams, Vice President for the same period, by a majority of votes."
Rarely do we have the pleasure of offering a newspaper with the official election report of George Washington's 2nd and last term, and terrific to have this report in a Philadelphia newspaper, the site of the nation's capital at the time
Four pages, archivally rejoined at the spine, a few indents at the margins not touching text, generally nice condition.