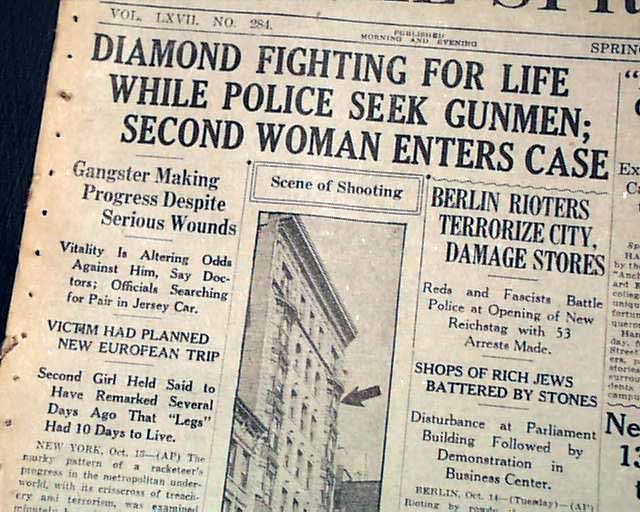 The top of the front page has a three column headline: "DIAMOND FIGHTING FOR LIFE WHILE POLICE SEEK GUNMAN; SECOND WOMAN ENTERS CASE" with subheads and related photo. (see)
Complete with 22 pages, light toning and a little wear at the margins, generally good.

source: wikipedia: Jack "Legs" Diamond (1897-December 18, 1931), aka Gentleman Jack, was a famous Irish-American gangster in New York City during the Prohibition era. A bootlegger and close associate of gambler Arnold Rothstein, Diamond survived a number of attempts on his life between 1919 and 1931, causing him to be known as the "clay pigeon of the underworld." In 1930, Diamond's nemesis Dutch Schultz remarked to his own gang, "Ain't there nobody that can shoot this guy so he don't bounce back?" Jack Diamond was not related to Lucchese crime family soldier, Stanley Diamond.