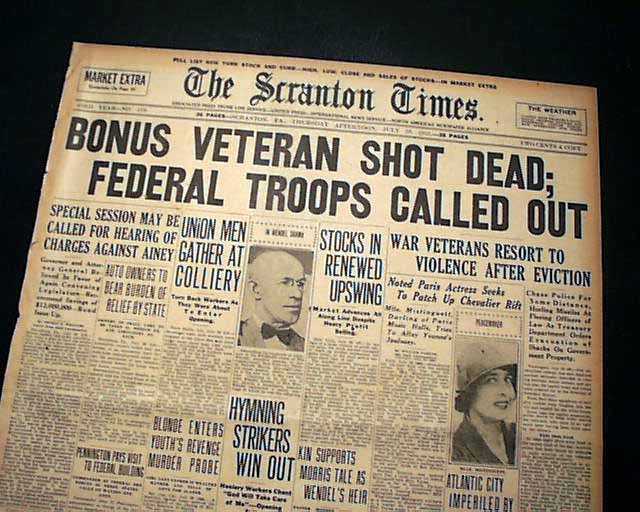 This 26 page newspaper has a very nice banner headline on the front page: "BONUS VETERAN SHOT DEAD; FEDERAL TROOPS CALLED OUT" with subheads (see photos). Coverage on the gathering of World War I veterans in Washington D.C.
Other news and various advertisements of the day throughout. Light browning, minor margin wear, otherwise good.

wikipedia notes: The Bonus Army or Bonus March or Bonus Expeditionary Force was an assemblage of about 17,000 World War I veterans, accompanied by their families and other affiliated groups, who demonstrated in Washington, DC, during the spring and summer of 1932. The marchers were seeking immediate cash payment of Service Certificates granted eight years previously by the Adjusted Service Certificate Law of 1924. Each Service Certificate issued to a qualified soldier bore a face value equal to the soldier's promised payment plus interest. The sticking point was that the certificates, similar to bonds, were set to mature a full 20 years from the date of their original issue. Thus, under existing law, the certificates could not be redeemed until 1945.