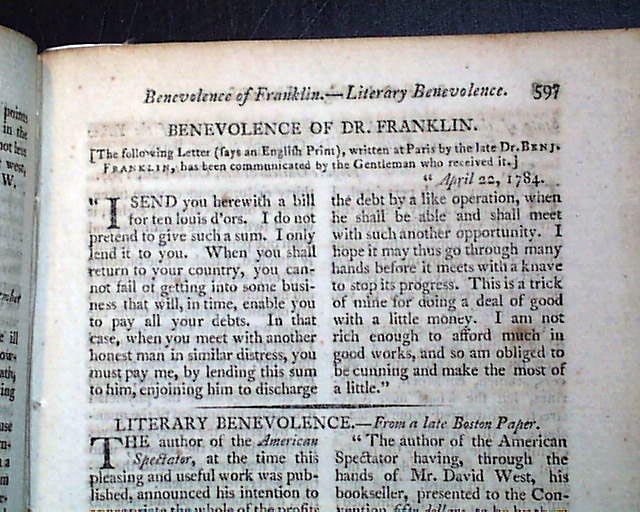 The issue is filled mostly with an eclectic collection of articles, while the back several pages contain news items of the day.
The most significant content is the: "PRESIDENT'S SPEECH" delivered to both houses of Congress on Nov. 23, 1797, being John Adams' first state-of-the-union address. It takes nearly 4 pages and is signed at its conclusion: John Adams.
Among the articles are: "Benevolence of Dr. Franklin" which is a letter written in Paris by Ben Franklin, darted April 22, 1784; and: "State ofd the Frigate United States During the Prevalence of the Yellow Fever...", and much more.
This is followed by nearly two pages of news which includes mention of the president returning to New York after several months' abscence.
There are no plates present.
Certainly one of the less common 18th century American magazine titles, existing from just 1790 to 1797.
Complete in 56 pages but the last leaf is present in photocopy, it containing no reports of significance. Measures 5 by 8 inches, lacking a full title/contents page, nice condition.